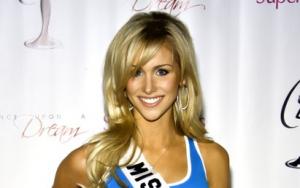 Candice Loren Romo, who is also commonly known as Candice Crawford was born on December 6, 1986, in Dallas, Texas. This former American beauty was a Miss Missouri USA in 2009 beauty competition. Later, she participated in the Miss USA pageant where she was one of the Top Ten contestants.

This beautiful lady grew up in Dallas with her older brother Chace Crawford, now he is an actor. Her mother is a school teacher and her father is a Doctor, a dermatologist specialist. She graduated from high school in 2005, after that she moved to Missouri and enrolled in the University of Missouri and pursued her career interest in Broadcast Journalism.

Crawford finished four-year Journalism course at the University of Missouri, Columbia and graduated in May 2009.

She won the 2008 Miss Missouri Pageant while she was a student at the University of Missouri. When she was working for 33TV, Candice featured a high school sports interviews, for that she use to travel every week and interviewed  the teams, cheerleaders, game day festivities, band members, drill team and captured several other activities.

Crawford competed in 2007 Miss Missouri pageant and was selected as a first-runner-up. The following year, in 2008, she competed again and won the beauty title, she also got special achievement title in the Swimsuit category.

Crawford worked as a sports anchor and a reporter at KOMU-TV, and she spent 2 summers with Dallas Cowboys by reporting their activities and games. During that period, she also worked for CBS as an on-air reporter for The Blitz segment about the Dallas Cowboys.  She was also an efficient member of Pi Beta Phi sorority, and also volunteered to write blogs on Midwest Sports for fans.

Besides her work, she loves to cook, play basketball and also, she likes to go to DM basketball games and spend time with her family and friends.

This beautiful lady was born in Lubbock and raised in Dallas, Texas. She graduated from TCA (Trinity Christian Academy) in 2005.  She also studied business and Journalism and worked as a reporter for the KOMU-TV, which is affiliated to NBC. On 16th March 2007, she was arrested for consuming alcohol at the Tonic Bar in Columbia, as she was underage to tenure alcohol.

In 2009 summer, she started dating Tony Romo, a quarterback for a Dallas Cowboys. On 16th December 2010, on her birthday, at KDAF news station she announced to the world that she is engaged to Tony Romo. On 28th May 2011 they got married and became wife and husband.

Soon on 25th October 2011, the couple announced that they were going to become proud parents for their first born, and on 9th April 2012 the baby Hawkins Crawford Romo arrived to their small world.  On March 18, 2014, the couple welcomed their second son, Rivers Romo to their world.  The images, pics, and other related info are available on their tweeter account.

Candice Crawford salary and net worth

Candice Crawford, the former Miss Missouri, was also a former reporter, who married Tony Romo has a net worth of $10 million.

Help us Edit this article and get a chance to win a $50 Amazon Gift card.
Last Modified: Mar 27 2016
You may also like
articles you may like