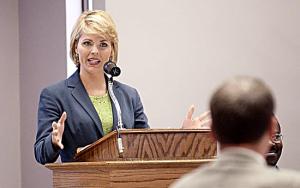 Catherine Callaway is the news anchor at the world headquarters of CNN in Atlanta. She is the anchor for the show CNN Tonight, which is a half an hour show that begins at 1 a.m. on weekdays. Earlier, she was the weekend host for the CNN Headline News.

Catherine Callaway was born in the year 1959. She graduated with honors from the Jacksonville State University in Alabama. She received her Bachelor’s degree in commercial advertising and communication there. She does not reveal much about her personal life and her marital status is not known.

Catherine Callaway started her career at WJSU-TV, which is now called as WBMA or ABC 33/40, in Anniston, Alabama in the year 1987. She later shifted to WAFF-TV as anchor and general assignment journalist. She worked there for one year and then  moved on to WBMG-TV, now called as WIAT situated in Birmingham, Alabama, where she worked for four years as reporter and hosted newscasts at 6 p.m. and 10 p.m. In addition to anchoring, she also covered key stories, did promotions and special features there. She also jointly produced the annual leukemia telethon while working at WBMG-TV. She joined CNN in the year 1993. She was in charge of newscasts on weekends. She later joined the CNN Headline News as fill-in anchor in the year 1997. In addition to covering key stories, she also served as correspondent for CNN Newsource. She is in charge of anchoring the CNN Tonight Show which runs for thirty minutes on weekdays. It serves as the evening newscast for the CNN viewers from the west coast.

During her career, Callaway has anchored many major news stories including the space shuttle launches, the Andrew Cunanan search that took place in Miami, the Arkansas State Paula Jones lawsuit, and the Atlanta Summer Olympics. She has received many awards from the Associated Press like the AP Pacemaker Awards for the Best Spot News Coverage, AP Best Reporter, and the Best Coverage of a Planned Event.

In addition to her work as news correspondent and show anchor, Catherine Callaway has also hosted many feature shows on CNN that focused on food, travel, and social issues like parenting. She is also an accomplished speaker and has many speeches to her credit. She has also made many public appearances for gaining attention on issues related to social, cultural, and economic conditions.

FAQ: What is Catherine Callaway networth in 2020?