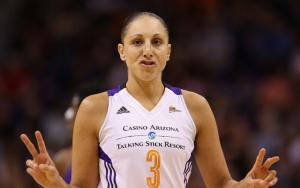 Remained favorite WNBA player for many years, Diana is one of the trophy players of WNBA. Her best known achievements include being national champion for three times and WNBA champion for three. Impressively, her regular season point per game (from 2004 to 2014) for Phoenix Mercury is 20.9 in 334 games.

Now moving on to her physical configuration, she is a tall woman with the height of 6 feet and 0 inches. Moreover, she is of athletic build. She likes to exercise regularly and prefers less fat foods (fat free milk and protein shakes after exercise).

Impressively, her net worth is speculated to be in the range of 1.5 million US dollars. Large part of her net worth comes from her long successful career (started from 2004 WNBA Draft by the Phoenix Mercury).

Born on June 11, 1982 Glendale, California in a family consisting of Italian American father and Argentinean American mother, Diana grew up in Chico, a city of blue-collar city with hardworking diverse image. She has been playing basketball since her childhood.  However, she had to tradeoff between football and basketball as a growing young. Her supporting ex-soccer player father wanted her to flourish as a football player. But, the irony was she was interested in both. Ultimately, she chose basketball as she enjoyed it more and nevertheless, as it had more market as compared to popular football.

People had never thought (including her parents) that Dina, a normal kid from Chino, would later be one of the most cherished players of the country.  However, she always believed herself and proved wherever she went. She would also compete with players above her age as a young girl.

She was just inspired by her hardworking city and parents especially her father, who according to her would work continuously for days not because he enjoyed the job but because it was his job.

She not only  excelled as an amazing forward, but  she also excelled in other abilities such as defense and passing. Her professional life achievements include 5 times WNBA scoring champion, 6 time WNBA peak performer.

This 2015 for Diana have been about gaining new experience and earning a lot of money.  She forfeited the 2015 WNBA season and went on to play for Russian giants UMMC Ekaterinburg as per as the request of the team.  She couldn't refuse UMMC request to play for them for 1.5 million $ for the year.  Previously, she earned $107,000 in the 2014 season playing for Mercury.

Her decision to take the season off and play in Russia even  started discussion  in the country weather WNBA can pay players what they deserve or not.

FAQ: How old is Diana Taurasi?

FAQ: What is Diana Taurasi networth in 2020?