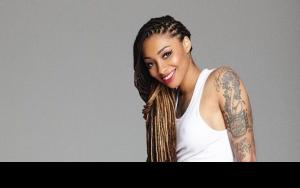 Dutchess Black is a famous tattoo artist and she is a leading star at TV shows named Black Ink Crew for Vh1. She grew up in North Carolina. She is the owner of a tattoo studio called Pretty Ink. She got nicknamed Dutchess of Ink because she loves tattoos. However, she is even more compared to what you see on the television, since they are edited blocks of the content.

Dutchess Black is a respected name into the ink industry; she is a business owner and an entrepreneur. She is highly educated and a celebrity. She attended Aggie and she had been successful on the print media and ramp. She is a successful model.

She had modeled in print publication like the urban ink and inked. Even if people get to see her life at Black Ink Crew, they do not understand the challenges she had to face to be esteemed member in ink community. She is a loved person and she has over a million followers on the Instagram, over 110 K on the twitter and over 167k followers over his Facebook account.

According to her biography, Dutchess Black was born in the city of Lincolnton in North Carolina. She was born as Crystana Lattimore in the year 1984. She is African-American. From early age, she became interested in colors, arts and painting and this helped her to gain the skills that led her to be a tattoo professional. While growing up, she would pain some designs and shapes on her arms and hands, but her parents did not like it.

However, her parents thought that it would pass away but this did not take place. Her parents wanted that she focuses more on her studies. However, with her hobbies, she did not undermine that education is important and she had always been a bright student. When she was doing her art studies in Georgia, a sudden death took place in the family and decided to come back to stay with the parents.

While at home, she managed to get needles, ink and books and in few months, she had made a name of herself into the ink community. She graduated at University of North Carolina in business management degree and was concentrating into the visual Arts. After establishing herself, she moved to New York City where she got a job at Black Ink tattoo parlor and became a part of the Vh1, a popular show. The show was about the operation of tattoo professionals and their clients. She got more attention when she started to date the parlor owner called Caesar.

After breaking up with Caesar, she started to date Zack Sanchez, but the relationship did not last too long. As for the movies, she appeared in Love & Hip Hop, Black Ink Crew and Dope Fiend. Her height is 5 feet and 5 inches, her weight is not well known and her net worth is 800 thousand dollars.