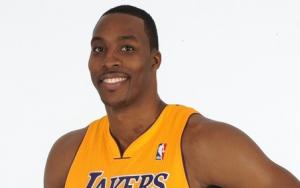 Dwight Howard was born on December 8, 1985 in Atlanta, GA. He is known around the sporting world as a famous American Basketball player. He is presently a member of the Washington Wizards. He is also an Olympic Gold Medalist.

Dwight’s mother was known as a basketball player. According to some reports, Dwight’s mother had almost 7 miscarriages before the birth of Dwight. She had to struggle through many medical complications before Dwight finally was born. He started playing basketball when he was just 9 years old and he completed his schooling from Southwest Atlanta Christian Academy. He played for his high school team and he was honored with the Player of the Year award for his excellent play. He also won McDonald’s National High School Player of the Year Award. He received many other awards during his amateur playing days.

After completing his years of high school, Dwight started his NBA career when he was drafted in 2004. He was selected by the Orlando Magic. Dwight didn’t go to the college so that he could fully concentrate on his sports career. He played for the team for 8 years before separating from them in 2012. His stats were very amazing which led him to winning the Rookie of the Year award.

In 2012, Dwight signed a free agent contract with the Los Angeles Laker but he only played for the team for a year. The team had chemistry issues which led to a large portion of the team leaving after the end of the season. During his stint with the team, Dwight suffered an injury and it took about 6 months to completely recover and get back to the game. He had the injury on his shoulder. He later started playing with Houston Rockets in 2013 and he played for the team until 2016. In 2016, Dwight joined Atlanta Hawks and that gave a much needed boost to his popularity because his play had been declining on his previous teams. In 2018, he became a member of the Washington Wizards.

When Dwight Howard was drafted into the NBA, some people raised their eyebrows when he suggested that a figure of him along with a Christian cross should replace the NBA logo. He was seen as someone on a high horse by some but by most other people, he was considered to be a very polite and good man with strong morals.

The narrative started to shift on Dwight Howard as he went through his career. When he went from being a hero to a villain, he was shocked. In an interview with Sports Illustrated, Dwight spoke about how he felt when people started viewing him as a bad person, “All of a sudden. I went from the good guy to the devil. You won’t understand, you won’t get it. What I’ve been through, I don’t want anybody else to go through.”

The criticism has caused Dwight tons of stress. He started to look back at his behavior and analyze how the proud and righteous 18-year-old he once was became someone who got caught up in a vicious cycle of shame and temptation.

He now wants to share his progress of redemption because he feels he was destined to become a role model because of the large platform that God and basketball has provided him. He wants to be the warning sign for future basketball players that may have trouble dealing the problems that he did.

One of his former teammates, Tony Battie tried to shelter him from the bad behavior but he could only do it for a short time before Dwight broke free, “I’d been so sheltered for so long, once I got out of my house, I was ready to try anything. It’s like, ‘I’ve heard so much about these clubs, these strip clubs, let’s try ’em out. Let’s party like these older guys.’ The booze didn’t do it for me, but the attention did.

You’re young, you’re on TV, and all these beautiful women are coming up to you. There’s no comparison, but at the time, I felt like a kid who has never had candy in his whole life and suddenly is given all the candy he could ever want. If you’re still just a kid which is what I was, you’re like, ‘Give me more.’ It became an issue.”

Braylon Howard was born in 2007 and became the apple of Dwight’s eye as his first child, “I was ashamed because I’d talked so much about being a Christian, professed my faith to the whole world, and here I was with a baby out of wedlock. My parents judged me. A lot of people judged me. I felt like I shouldn’t even be out in public because everyone looked at me as a hypocrite.”

Dwight is actively involved with charities and he is a strong follower of his religion. He also heads a foundation which provides a scholarship to deserving students. There are several other charities with whom Dwight is associated with. Dwight is not married but he had been in a relationship with Royce Reed. He wanted her to be his wife but things didn’t work out between them and they decided to call off their relationship.

FAQ: How old is Dwight Howard?

FAQ: What is Dwight Howard networth in 2020?