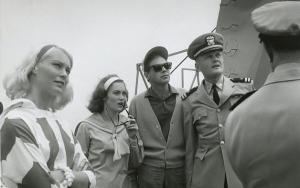 Gloria Neil was born in 1941 on January 13th, and has had a career in American television and film. Her better known roles are in The Man from U.N.C.L.E, and The Beverly Hillbillies. Some older movies from the 1960’s include The Beach Girls and the Monster and The Karate Killers. Born in Arizona, Gloria quickly moved to Palm Springs California in the early part of her life.

Her first taste of entertainment and the spotlight came as a beauty contestant, and a 1958 running for the Miss Universe competition won her a runner-up placement. She won the Junior Rose Bowl Queen a year later, and then worked as a model which got the attention of Universal Studios in 1960. She has parts on several well-known TV shows such as The Dick Van Dyke Show and The Lively Ones. She married in 1960 and raised two children, retiring from active film and tv work.