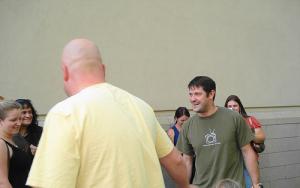 Grant Steven Wilson is the co-founder of The Atlantic Paranormal Society (TAPS) and an art designer and developer for Rather Dashing Games (now a branch of Kalmbach Publishing), a game company he started with Michael Richie. He is also the star and co-producer of Ghost Hunters, a cable television reality show. He departed the show in 2014, but he returned for the comeback in 2019.

Grant Steve Wilson was born on July 3, 1974, in Providence, Rhode Island. After graduating from Scituate High School in Rhode Island in 1992, Grant Wilson's first job was web designing. He then became a plumber when he worked for Roto-Rooter, a big plumbing company operating in Cincinnati, Ohio.

Wilson's interest in the paranormal was born after a recurring paranormal experience that started when he was 15 years old. He said he had met an unidentified entity in the Rhode Island woods. Grant Wilson's first important step to becoming a television star has been when he co-founded The Atlantic Paranormal Society (TAPS) with his friend Jason Hawes. Wilson was offered to redesign the Rhode Island Paranormal Society (RIPS) website, a support group located in Warwick, Rhode Island, that Hawes had founded for people exposed to paranormal experiences.

Wilson and Hawes were longtime co-workers in the plumbing company Roto-Rooter because Hawes was the one who brought Wilson into the plumbing business. The two friends also co-owned a hotel, the "Spalding Inn," based in Whitefield, New Hampshire.

Grant married his lover, Reanna, in 1997. They have three children together from their marriage. When Wilson was asked about the reasons behind his departure from Ghost Hunters, he explained that his life was becoming like a box, working in a monotonous way, as he used to go out from house to car, from car to airport, from airport to a hotel in the nowhere. According to him, working as a paranormal activist is like playing with life & physical health as you, at the mercy of God. He said that his working timing was abnormal and that he was working late nights & getting less time to sleep in the morning.

He also added that his lifestyle had become so stressful that he forgot what fine dining was. He had forgotten about how a meal enjoyed with your family tastes. He explained he was missing his kids as they were growing up and that his work schedule was not allowing him to spend any time with them. However, he appreciated his life partner as a patient wife, as she never complained about him or his lifestyle. Instead of criticizing him, she always supported him while taking care of their kids.

Grant Wilson started working as one of the actors and as a co-producer of SyFy's reality series "Ghost Hunters" in 2004. The show has been very successful since it attracted the attention and curiosity of the public. On February 15, 2012, Wilson announced that he would have left Ghost Hunters for personal reasons, including working on his projects. The rumors were that Grant was going to leave after getting divorced from his wife, Reanna. According to Wilson, he had sufficiently achieved what he had sought out to do while working as a paranormal activist, making people aware of the existence of the supernatural.

Wilson came back to Ghost Hunters for the two-hour 200th episode in 2014. In the same year, Wilson was placed in the cast of the web series "Haunt Me," where he helps some young paranormal detectives solve mysteries around the country.

Together with his friend, Jason Hawes, and with other members of the paranormal community, Grant Wilson often goes to schools and to paranormal-related conventions to give lectures. He is also available for hire to take part in private ghost hunting trips, and he often participated in beneficial events to raise money for various charities. Wilson and Hawes also participated in many ghost hunting events organized by their society. They have visited haunted locations like the RMS Queen Mary ocean liner in California, the Stanley Hotel in Colorado (famous for being Stephen King wrote "The Shining"), and the Buffalo Central Terminal in Buffalo, New York.

When interviewed about how the paranormal trips work, Wilson said, "We pull the audience in as part of the event where they can go online. They can watch special camera angles online. They can report activity." The infamous panic button is something that viewers have used in the past to staggeringly high numbers to inform Hawes, Wilson, and the crew of possible activity, "The viewers have a panic button which was pressed, I don't know, tens of thousands of times last time when people think they see stuff. And then, if it's legitimate, we'll investigate. And so it's more than just watching it. You are interacting and somewhat investigating with us."

Wilson owns a board game company called "Rather Dashing Games," which produces approachable hobby games. Wilson enjoys spending his spare time writing and illustrating fantasy and role-playing game characters and playing and composing music on various instruments, including guitar and piano. Wilson is also penning a series of Steampunk novels and High Fantasy novels with his life-long friend Mike Richie.

FAQ: How old is Grant Wilson?