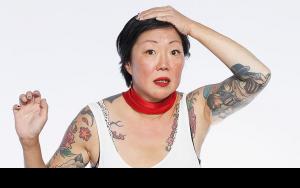 Margaret Cho is an American stand-up comedian, actress, author, singer, songwriter, and fashion designer who was born on December 5, 1968, in San Francisco, California. Cho was raised by her Korean parents Young-Hie and Seung-Hoon Cho who ran a bookstore in San Francisco. Cho described being bullied in school as well as being sexually molested by a family member. She attended Lowell High School but was often absent from class. She also says she was repeatedly raped through her teenage years by an undisclosed acquaintance. Cho eventually pursued a career in drama and attended the San Francisco School of the Arts. During her time at drama school, Cho performed in the school's improvisational comedy group. She went on to perform several shows at a club near her parents' bookstore and launched her comedy career while appearing on television and university campuses. Cho's comedy centers around political topics including sexuality, LGBT issues, and race. Cho went on to found a clothing line in 2003 called "High Class Cho". She married an artist named Al Ridenour in 2003 until their divorce in 2015. Cho describes herself as bisexual but in a 2018 interview with the Huffington Post, she also described herself as pansexual.

FAQ: How old is Margaret Cho?