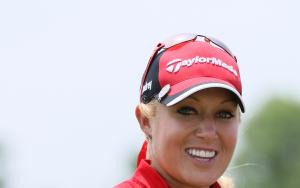 Natalie Gulbis was born in the Sacramento California on the 7th of January 1983. At the age of only four, Gulbis became interested in the game of golf. At seven, she won her first tournament, at the age of ten she was already breaking par. She player her first LPGA Tour event in the year 1997. She was 14 years old and was an amateur. She played on the boys' golf team and was the top player at Granite Bay High School. She graduated at the age of 16 years old.

In the year 2000 she was offered a golf scholarship from the University of Arizona. After spending one season at Arizona, Gulbis dropped out of college to play professional golf in July 2001 at the age of 18 years old. In October 2001, Gulbis participated in the LPGA Final qualifying Tournament in Daytona Beach,Florida. Gulbis tied for 3rd place and at this time she earned her 2002 tour card. Gulbis didn’t win a tournament on tour until entering her sixth season. During her fourth season, she finished in sixth place on the LPGA money list. She made over 1 million in earnings which was reported in 2005 in her fourth season.

In four consecutive major events she made it into the top 10. These major championships took place between 2005-2006 and were the 2005 LPGA Championship and the Kraft Nabisco Championship. In the year 2007, Gulbis took her first professional win in France at the 2007 Evians Masters championship. She defeated Jang Jeong(South Korean professional golfer) and earned herself a large prize valuing $450,000. Gulbis has played in three Solheim Cup teams. In the years 2005, 2007 and 2009 they recorded three victories. Gulbis was seen as a bomb shell in the LPGA. In the year 2005, she endorsed a calendar as it came just before U.S Women’s Open in 2004. For this calendar in which she posed playing golf, and also in swimwear in abnormal poses. The USGA (United Nation’s Golf Association) banned it to be sold at the event, making it unfortunate.

They deemed the calendar as unprofessional. The calendar was sold at Golf Canada openly and enthusiastically. USGA was criticized all over for its hype and overreaction. Gulbis attended a shoot on November 2004 issue of another magazine called FHM. Gulbis also gave away a chance to readers to play golf at her home course with her.She stated she liked the attention, even if it was mostly for her appearance. Gulbis once quoted that she loves the attention she receives from her fans, no matter what is it for; she also has endorsement deals with some big corporations such as TaylorMade/Adidas,Canon, Lake Las Vegas Resort, Pure Silk,Lexus,EA Sports,McGladrey LLP, Michelob Ultra,Winn Golf Grips, SkyCaddie, Payment Data Systems, and MasterCard.

FAQ: How old is Natalie Gulbis?

FAQ: What is Natalie Gulbis networth in 2020?