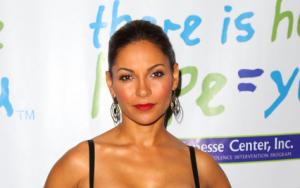 Chicago, Illinois is her hometown or birth place, and she was here born to American mother having African ancestry and her father had an Irish and Italian origin. Acting was on her mind right from the very early age. This fact is evident in her biography as she had been attending Kuumba Workshop regularly where she acted, and her acting prowess got nurtured there. It shows her interest for choosing a career in acting. After playing small roles here and there, she slowly set herself into the film industry. Prelude to a Kiss and Posse and other films like these where those movies where she appeared in minor roles. But slowly her acting got recognition, and she began to receive major roles in the films.

We learn from her bio that Sally Richardson had been in a relationship with Dondre Whitfield and this relationship lasted for quite a long time before she got married to Whitfield, who is also an actor. They have a daughter and a son and have a kind of beautiful family now.

It was through her movies that she found her husband, and they seem to be quite happily living a family life and enjoying it thoroughly. It is because actors get to know each other very well while working in a movie together, and the same thing happened with Sally Richardson also.

Her pictures are innumerable ranging from comedies to thrillers and horror to psychological dramas. Prelude to a Kiss, Posse and Mo`Money are her earlier pictures where she played significant roles. She then played prominent roles in pictures like Sioux City, A Lowdown Dirty Shame and Disney-produced TV series Gargoyles. Family Law is another series wherein she had a major role. She then appeared in Rude Awakening, Antwone Fisher, and Anacondas: The Hunt for the Blood Orchid and also more than these pictures she appeared in I Am Legend, I Will Follow, Pastor Brown and The Sin Seer.

Her fitness came into the limelight when she was pregnant, and creators of Eureka had to create a modified role for her so that her pregnancy gets accommodated into the story and as such in her character also. It gave a kind of natural touch to her character, and she got a chance to work in her pregnancy also. Next, she was seen in The Lottery and Stitchers. Sally had a successful career both as a television actress and equally so as a film actress as well. She has done comedy, horror and action movies alike and done so quite smoothly. It all proved her worth as an actress and her prospect as an actress also increased significantly making her gain roles in many and many movies.

Her net worth is $ 2 Million and she gained it primarily through her career as an actress, and this figure emerges as a testimony to this fact that she had a kind of busy acting career and that her acting was being liked by the people involved in film industry particularly directors and producers.

FAQ: How old is Sally Richardson?

FAQ: What is Sally Richardson networth in 2020?