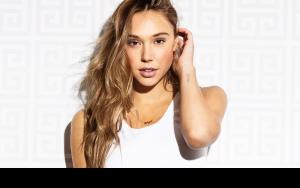 Alexis Ren is an Instagram star and an American model and an internet personality. She has also collaborated with a number of brands, including Forever 21, Tobi, and others. On social media, Alexis Ren is one of the most well-known models. On 'Tumblr' and 'Instagram,' she became well-known. When she was 13, she was approached about a modeling opportunity. Ren competed in the 27th season of Dancing with the Stars with her partner Alan Bersten, and they made it to the finals.

Alexis Ren was born in the city of Santa Monica, California, on November 23, 1996. Her father's name is Frank Gaylord, a lawyer, and her mother's name is Cynthia Gaylord, a nutritionist. In 2014, her mother passed away from breast cancer. At the age of 13, Ren was hired by a modeling agency. She is the youngest of four siblings, which include three sisters and one brother. Ren began modeling when she was 13 years old.

Ren was discovered at the age of 13 and signed with the modeling agency Brandy Melville. She became a social media celebrity when photos of her in a black string bikini standing by the pool went popular on Tumblr when she was 15 years old. She has now appeared in a series of commercials for the mobile game Final Fantasy XV: A New Empire. Ren Active, an activewear collection, was launched by her. Ren was named Sports Illustrated Swimsuit's Rookie of the Year for 2018. Ren was named as one of the celebrities competing in season 27 of Dancing with the Stars on September 12, 2018. Her business partner was Alan Bersten. Ren and Bersten made it to the finals on November 19, 2018, and finished fourth.

She was the cover girl of Maxim's August 2017 edition, Maxim's Mexico cover girl in March 2018, and the 2018 Sports Illustrated Swimsuit Issue Rookie.

Ren was named to Maxim's Hot 100 list of the sexiest women in the world in 2019. In October 2019, she appears in Ed Sheeran's "South of the Border" music video as "Scarlet Jones." She had previously appeared in Kygo's "Not Ok" music video.

Alexis and Alan have been on the edge of elimination more times than the other surviving finalists on Dancing with the Stars.

In 2014, her mother, a health nutritionist, passed away from breast cancer. When Ren's mother died, she developed an eating issue, and she later admitted to being in a "toxic state of mind."

From 2015 to 2016, Ren dated Jay Alvarrez, a travel influencer, and surfer. She confirmed a romance with her dancing partner Alan Bersten during the 27th season of Dancing with the Stars, which lasted from October to December 2018. From March 2019 to April 2020, Ren was in a relationship with actor and model Noah Centineo.