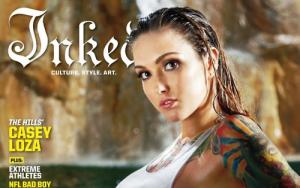 Angie Carlson is known as an American reality television star and business owner. She is most famous for being the wife of Michael Ballard, the star of the reality TV show Full Throttle Saloon.

Angie Carlson was born in 1976. She is a company owner, a reality television star, a YouTuber, and the marketing director for Full Throttle Saloon. Emilly Grace Lynnl is her only kid, and Carlson is married to Michael Ballard. She is a member of the Full Throttle Rock Stars, a rock band.

After Angie started dating Michael Ballard, she knew that she would marry him a few short years later. Their wedding took place in Kansas City during the Full Throttle Bike rally in August 2012.

Angie started the band called "The Full Throttle Rock Stars," and she jammed with them for some time before she found out that she would have her and Michael's first baby in 2013. She immediately took to social media flooding her Facebook account with sonograms and cute messages about their future child. Angie gave birth to her daughter Emilly Grace Lynn on April 4th, 2014.

Most of Angie's wealth comes from her sales at the saloon and her appearance on the reality TV show.

Angie's husband, Michael, built one of the most successful and entertaining bar establishments in the northern United States. Michael made the bar with the idea of a niche market in mind. The bar was specifically built to serve the thousands of bikers that ride to Sturgis each year for the Sturgis Motorcycle Rally. The annual event lasts for seven days and holds hundreds of thousands of motorcycles enthusiasts each year. The Full Throttle Saloon bar serves an average of 20,000 customers a night for each night of the rally.

He purchased the property at the beginning of 1999 and has expanded the structure and added buildings to accommodate the growing crowds over the years. By 2015, the Full Throttle Saloon had become one of the giant biker bars in the whole country. The Full Throttle Saloon is located just outside the town of Sturgis, South Dakota. The bar's property is around 30 acres of land and features several structures, including three bars, a stage for Jakyle to play, a tattoo parlor, a wrestling ring, a zip line, random areas for vendors and performing arts, and the infamous "Aggieland" named after Angie.

The Full Throttle Saloon was picked up as a television series and premiered in November 2009 on the truTV network. It chronicles the daily operation of the famous and unique biker bar. Angie joined the Full Throttle Saloon cast in the second season of the show's taping. She originally started as a waitress and then moved to be one of the "Flaunt Girls" dancers. She soon was given a small stage back for people to come and get photographed standing next to her butt. She would stand on a table, bend over, and place her rear end on someone's head or shoulder for a short period. The visitor would then have a picture taken with her butt on them as a memento of their time spent there. Angie claims that "Aggieland" is unique because "Life is all about that ass!" Some people have claimed that Angie's rear end is among the most photographed in the world.

FAQ: What is Angie Carlson networth in 2020?

Quick Facts
Help us Edit this article and get a chance to win a $50 Amazon Gift card.
Last Modified: Aug 7 2021
You may also like
articles you may like