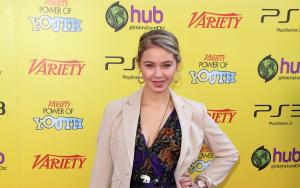 Ayla Kell was born in LA, California on 7th October 1990. Young, and pretty, she is one of the most promising actresses of our time. Being 5’5” tall, she is famed for her role on ‘Make it or Break it’ show on ABC Family. She has been active on show business since the year 1994. She is a slim built beauty with green eyes. Only at the young age of 25, Ayla Kell has managed to appear in some of the best movies we have seen produced today. After her high school education, it was clear that she wanted to join the show business. She attended the Royal Academy of Dance where she studied to become a ballet dancer. She worked with the American Ballet Theater before her acting career started to take off. She happened to appear in the show, ‘The Nut Cracker’ and played under the stage name, Greta. She also made some appearances at the Kodak theatre where she was involved in some music production.

Ayla Kell’s acting career is divers and she has appeared in several shows. She is famous for playing Payson Keeler on the family series ‘Make it or break it’. This is an ABC production series. It was her very first lead role appearance and it actually catapulted her career. She has also taken other several minor roles on TV appearing on ‘Without a trace’ and the show ‘CSI Miami’. She has also made many appearances in commercial internationally for big corporations like Mattel, Disney and Sony. She has made several appearances in the following movies; Walt before Mickey, Rosemont, What Just happened, and the omega code. Other minor television roles include; Malcolm in the middle, Leverage, Melissa and Joey, Weeds and many more.

Ayla Kell recently revealed her relationship status. Her current boyfriend is Sterling Knight of whom they share the stage at the set of the show ‘Melissa and Joey’. They met when playing these roles and announced that they were a thing last November. She was quoted saying that she feels his vibe as a great southern gentleman who is so bad at cleaning up but a very good cook. That’s a great lesson for anyone who aspires to become a gentleman out there.

Ayla Kell acting career and show business has not left her disappointed. She makes a whooping 120K USD per year and her current net worth is estimated to be around 1 million USD not mentioning her endorsement and advertisement earnings. Many people have gossiped about her body, others calling her fat. Ayla Kell does not care about what people will think of her as long as she feels she looks good on TV. She was quoted saying that she uses her clothes to measure her weight. If her jeans are loose then she knows she’d gotten a little lean. If they don’t fit then she must have grown a bit. So does her diet. If she feels overweight then she will go for the veggies. That’s just it. She currently weighs 32 Kgs and she goes for a bra size 32B.

FAQ: How old is Ayla Kell?