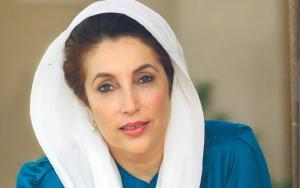 Benazir Bhutto (21 June 1953 – 27 December 2007) was a Pakistani politician and stateswoman who served as the 11th Prime Minister of Pakistan for two non-consecutive terms from 1988 to 1990 and then from 1993 to 1996. A scion of the politically powerful Bhutto family, she was the eldest daughter of Zulfikar Ali Bhutto, a former prime minister himself who founded the centre-left, social-democratic Pakistan Peoples Party (PPP). She holds the status of being the first female leader of a Muslim country.In 1982, three years after her father's assassination, 29-year-old Benazir Bhutto became the chairperson of the PPP—a political party, making her the first woman in Pakistan to head a major political party. In 1988, she became the first woman to be elected as the head of an Islamic state's government; she also remains Pakistan's only female prime minister. Noted for her charismatic authority and political astuteness, Bhutto drove initiatives for Pakistan's economy and national security, and she implemented social-capitalist policies for industrial development and growth. In addition, her political philosophy and economic policies emphasised deregulation (particularly of the financial sector), flexible labour markets, the denationalisation of state-owned corporations, and the withdrawal of subsidies to others. Bhutto's popularity waned amid recession, corruption, and high unemployment which later led to the dismissal of her government by conservative President Ghulam Ishaq Khan.In 1993, Bhutto was elected for a second term after the 1993 parliamentary elections. She survived an attempted coup d'état in 1995, and her hard line against the trade unions and tough rhetorical opposition to her domestic political rivals and to neighbouring India earned her the nickname ""Iron Lady""; she was also respectfully referred to as ""BB"". In 1996, charges of corruption levelled against her led to the final dismissal of her government by President Farooq Leghari. Bhutto conceded her defeat in the 1997 Parliamentary elections and went into exile in Dubai in 1999.Nine years later, in 2007, she returned to Pakistan, having reached an understanding with President Pervez Musharraf, who granted her amnesty and withdrew all corruption charges against her. Bhutto was assassinated in a bombing on 27 December 2007, after leaving PPP's last rally in Rawalpindi, two weeks before the scheduled 2008 general election in which she was a leading opposition candidate. She was the recipient of United Nations Prize in the Field of Human Rights, Legion of Honour, Order of Ouissam Alaouite and has been submitted into the Academy of Achievement.

FAQ: How old is Benazir Bhutto?

FAQ: What is Benazir Bhutto networth in 2020?