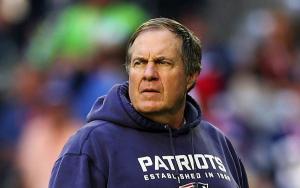 Best known as the head coach and general manager of last year Super Bowl Champion "The New England Patriots", Bill Belichick is yet again showing his class. Currently, his team is shining at the top of AFC EAST. Critics are saying The New England Patriots are the safest bet if you want to put money on a team that will reach Super Bowl this year. If you don't know, Bill is three times National Football League Coach of the Year Award winner. Wow factor is, his net-worth is speculated to be in the range of 35 - 50 million US dollars and salary is speculated to be in the range of 7.5 million to 10 million US dollars. He is  probably the highest paid NFL coach currently.

Now moving on to his physical configuration, the American national of Croatian heritage is a tall man with the height of feet and 11 inches. He is a big guy with short hair whose weight is speculated to be in the range of 95 to 105 kg.

Talking about his relationship status, he is dating Linda Holliday, a mother (two daughters fro previous marriage), the Director of The Bill Belichick Foundation, NFL FootballHost/tv-sports correspondent (WBZ-TV and WSBK-TV), entrepreneur (ex owner and CEO of Blue Indigo Boutique in Florida),  beauty pageant and radiography graduate from Vanderbit University (Nashville). Linda, who can be often seen cheering her boyfriend Bill and his team  at Gillette stadium or attending special events (including charities) with him, is Bill's first known relationship after his divorce from his wife Debby Clarke in 2006. Nevertheless, he has altogether three children (from his marriage with ex-wife Debby, his college sweetheart.

As reports have it, the three children are also building quite a reputation for themselves. Son Brian is currently attending Connecticut located Trinity College and also playing lacrosse there, son Stephen is Patriots assistant (Rutgers university scholarship student and graduate, and ex- lacrosse player), and  Wesleyan university graduate daughter Amanda Belichick is the head coach of women lacrosse team of Holy Cross College, Massachusetts.

From what we have heard, Linda and Bill first met in a nightclub probably in 2007.

And, there are some alleged relationship controversies that have surrounded him in the past like "maintaining relationship with former Giants receptionist Sharon Shenocca despite of being married to Debby".

Born on April 16, 1952, in Nashville, Tennessee, to an inspiring assistant football coach father(Steve Belichick) and loving mother (Jeannette), Steve is regarded as the best head coach of this generation.

Economics graduate from Wesleyan University; Bill Belichick had been excelling in football and lacrosse since his school days as a player until he assumed the responsibility of special assistant for Baltimore Colts in 1975 after graduating from from his university.

There are two figures in his life who can be credited for helping him in understanding the football game. The two figures are his football assistant coach father (34 years experience as football scout and coach at US navy) who taught him everything about football and his mentor Bill Parcels, a veteran ex-coach who mentored Bill as his assistant in teams such as New York Giants (won 2 Super Bowls as assistant coach under Bill Parcel), New England Patriots and New York Jets.

Belichick is just not a football head coach, but a legacy. Obviously, he has been a controversial figure many times in the past (remember the sidelining videotaping controversy, the shoving reporter controversy, and the cheating scandal that ended his marriage), but no one can deny his stats as a coach. Impressively, he is the NFL's longest tenured active head coach. He currently holds some impressive stats such as being fifth in regular season coaching wins in the NFL and first in playoff coaching wins in NFL. Truly, he will be always remembered as the coach with most Superbowl victories (four with New England Patriots as the head coach). Also, he has brought 6 championship wins to Patriots.

Interestingly, he is also famous for his two liners interview answers and is known as someone cunning and smart who will try any means to bring winnings to his team and someone who strictly means business in football. Believe it or not, he also spent most of his off-season preparing his future plans and also visiting other programs to learn from their experiences such as studying NAVY tactics, learning about NFL contracts and negotiations and also about other team's systems, tactics and strategies.

Amazingly, people close to Bill describe him as a shy person.

Unfortunately, his presence in social networking sites is zero. In an interview he has said that, he has got no time to get involved in such activities.

FAQ: How old is Bill Belichick?

Quick Facts
Help us Edit this article and get a chance to win a $50 Amazon Gift card.
Last Modified: Apr 19 2020
You may also like
articles you may like