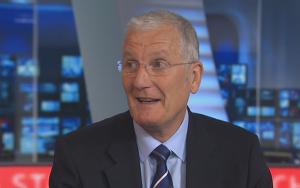 Bob Willis was known as an English cricketer. He is most famous for playing for Surrey, Warwickshire, and England.

Bob Willis was born on May 30, 1949, in Sunderland, England. His childhood was spent growing up in Sunderland with his two siblings. His father, John Wills worked for BBC. Bob completed his primary education at Royal Grammar School. Bob played football for his school.

In 1980, Bob married Juliet Smales. He along with his wife gave birth to a daughter. Their relationship lasted for 25 years until Bob filed divorce after a strained relationship.

Bob Willis started his career at a very early age. He started his career with Stoke d Abernon Cricket Club in 1968. The first team he played for was Middlesex. He later joined Surrey and he was known for his bowling style. Bob led his team to victory in many matches. Later in 1970, he was selected for the national team of England, and the first match that he played was against Australia. Bob also played against teams like West Indies and India. In 1975, it was reported that Bob had a major knee injury and Bob had to undergo many surgeries because of the injury. His recovery was very slow and it caused him to miss several matches away from the team.

His performance suffered after the medical operation and it took him several months of practice to get back in form. He played against India after the recovery and his performance was very commendable. Bob also played in the World Cup season of 1979 but he was again injured in the game. Bob was also given a chance to play as the captain for England and he helped the team in securing several titles.

In 1983, Bob Willis announced his retirement and after retirement, he decided to work as a commentator. He got a job with SKY Network and he started working for them in 1985. Bob also got a chance to work on BBC TV Cricket for two years and he worked on the show by recapping game results. Later in 1991, Bob got an offer from SKY Sports and it was beginning of a new phase in his life. He appeared in several shows after that. Some people loved his style but others felt like he sounded too monotone and need more enthusiasm.

Bob played a total of 90 test matches and 64 international matches. His batting average had been low and he never scored a century or a half century in any of the matches because he mainly focused on the balling. In test matches, Bob cracked wickets and he cracked 80 wickets in ODI. Regarding test matches, in 16 innings, he managed to take 5 wickets.

The net worth of the famous cricketer is not known but he earned a health salary while he was playing.

On December 4, 2019, Bob passed away in Wimbledon, London, United Kingdom after suffering from a long illness.

FAQ: How old is Bob Willis?