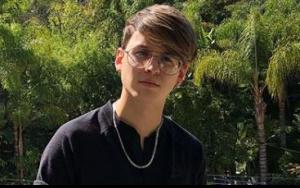 Christopher Velez is an Ecuadorian-American singer who has achieved fame through his membership in the Latin boy ban CNCO, which was formed on the first season of La Banda. La Banda is a Spanish-language singing competition series created by Ricky Martin and Simon Cowell, and produced by Ricky Martin. The show’s goal is to search for and find talented teenage musicians to turn into the next musical phenomenon. CNCO is an extremely popular group, selling out forty concerts in fifteen different countries in 2017. Christopher Velez was born on November 23, 1995, in New Jersey but lived in Loja, Ecuador, with his parents until he was eighteen. He studied at the La Salle educational unit in Loja, where he graduated as Bachelor of the Republic of Ecuador.

In 2014, Christopher was working as a shoe cleaner until December 13, 2015, when he became the first winner of La Banda and the first member of CNCO. Christopher’s band’s first single, Tan Facil, reached the number one spot on Billboard’s Latin airplay; the band’s other singles include So Easy, Hundred, I Would Like, and To Fall in Love. They released their first album, Primera Cita on August 26, 2016.  The group released their latest single, Mamita in April 2018 and is currently under contract with Sony Music Latin.

FAQ: What is Christopher Velez networth in 2020?