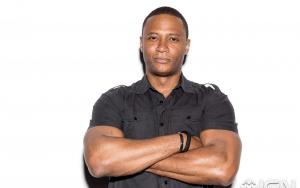 David Ramsey was born on November 17, 1971, to Nathaniel & Jeraldine Ramsey in Detroit, Michigan. As a kid, David fancied his elder brother as an artist & aspired to be like him on growing up. So following the footsteps of his elder brother, David played some roles at his local church. It was here that he knew, he was born for acting. During high school, he actively took part in plays & continued in the local plays as well. Later he went to Wayne State University in Detroit, where not only learnt the craft but also played in the professional theatre. David then moved to Los Angeles to try out his acting skills & eventually got offers as a “sides” meaning extra.

It was here that a casting manager who then recommended David to get an Agent for himself so as to clinch various offers noticed his talent. David debuted in the 1987‘s supernatural flick “Scared Stiff” which was a low-budget one. However, as his biography reveals, it took a full decade, which was filled with cameos on TV shows like Murder One, Space: Above & Beyond & Her Costly Affair, for his career to bloom which, resulted in him landing in movies like The Nutty Professor & A Very Brady Sequel in 1996. Following these two hits was Con Air, which quickly got him the much-needed attention. Before getting his big break in Con Air, David was working at a Video Store.

His first meatier role came with The Good News, a sitcom in 1997 where he played the role of a Pastor. The sitcom lasted only for a season but was of immense help to boost David’s career. After a brief role in Three to Tango & a string of character roles in TV Shows like Chips ’99 & Mama Flora’s Family, David played the epic role of Mohammed Ali in the biopic Ali: An American Hero in 2000 & played a brilliant supporting role in Pay It Forwards the same year. The next year saw him playing a golf pro in the slapstick humor flick Mr. Bones which went on to gross the highest collection in South African domestic history.

As his biography reveals, he loves to act in movies and TV Shows. He enjoyed his tryst with TV circuit in shows like The West Wing, Ghost Whisperer, CSI: Miami, NCIS, The Guardian, Charmed, Crossing Jordan & the fabled All of Us, produced by Will Smith & Jada Pinkett-Smith. His perseverance bore fruits, which led him to play the role of Anton Briggs in the 3rd season of the popular series, Dexter. For this David also shared an Emmy Nomination for Outstanding Performance by the cast. David continued to be in the spotlight after his performance in Dexter, which led to his regular appearances in Outlaw, The Defenders & Blue Bloods. Owing to his character defining performances, David was cast in CW’s Superhero action-drama, the Arrow as John Diggle alongside Stephen Amell.

David Ramsey is happily married to his wife Briana Ramsey. The handsome actor has an estimated net worth of $55 Million from movies and TV Shows.

FAQ: How old is David Ramsey?