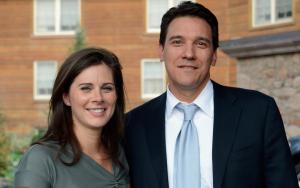 David Rubulotta is known as an American businessman. He is most famous for being the managing director of high-yield sales at the finance company, Citigroup.

Rubulotta enjoys life along with his wife, Erin Burnett. Rubulotta and Erin met on a blind date in 2003. They had been in a relationship for eight years before getting engaged in 2011. They got married a year later on Dec 21, 2012. Their wedding ceremony in New York City Hall was very remarkable. Erin herself planned the wedding party with a Christmas theme. She said that Christmas is their favorite time of the year and they thought it would be a perfect theme for their marriage. The ceremony was officiated by a judicial officer. The bride dressed in red for the ceremony and she told People magazine about her ceremony plans. She said that people from City Hall were very casual and they came dressed to the ceremony in a wide range of clothing from suits and wedding gowns to jeans.

They have two children together. They have a son named Thomas Burnett Rubulotta born in 2013 and a daughter named Colby Isabelle born in 2015. Burnett said that seeing their son for the first time was the most joyful moment of their entire lives. She said that they always wanted children and were very lucky and ecstatic to finally welcome children into their family.

Rubulotta’s wife, Erin Burnett works as an anchor for CNN. She hosted the TV programs called Street Signs, Squawk on the Street, and Erin Burnett Outfront. While working at NBC, she was called "The International Superstar" for her contribution to a number of political documentaries.

Even with all the wealth, he has built up, Rubulotta puts more value in the family that he has created with Erin. He is happy to have found a woman that could do her own thing without needing his help.

David Rubulotta’s strong foundation in education gave him a lot of opportunities to start a career in the marketing world. Rubulotta worked with the Lehman Brothers firm in stock trading. After much success with other companies, Rubulotta eventually moved on to his role as managing director in high-yield sales for Citibank. Rubulotta is considered to be one of the prime factors in Citibank’s development.

Rubulotta’s role as the Managing Director of Citibank has helped it grow into one of the more prominent banks. It is believed that his salary increased exponentially due to his contribution.

Rubulotta’s financial success earned him a place in the celebrity world. Rubulotta likes to involve himself in the social lifestyles of the rich and famous. He uses his clout as a businessman to get into social circles. Rubulotta is a big fan of famous personality and politician, Chris Christie. This led him to donate $3400 to Christie’s general election campaign in 2009.

FAQ: What is David Rubulotta networth in 2020?