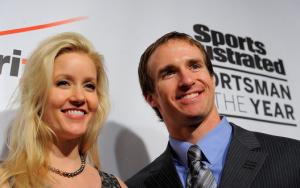 Brittany Dudchenko was born Brittany Middleton Dudchenko, January 15, 1979, in Syracuse, Indiana. Brittany Dudchenko graduated from Wawasee High School in Syracuse, Indiana, in 1994. She continued her education at Purdue University in West Lafayette, Indiana. She met Drew Brees, a well known foot ball player, at Purdue. Brees says of the incident: “I made a real fool of myself when I first met her. It was when I was a sophomore. It was my 20th birthday, and I’d had about 17 shots and put my foot in my mouth. It was a typical football player cheesy line—we’ll leave it at that. It took me six months to get the courage to talk to her again. I finagled my way to get invited to a party that I knew she’d be at.” Drew Brees turned out to become her husband after few years after their graduation. Right from the beginning, Brittany Dudchenko has played an important role in the success of Drew Brees in his career.

Brittany Dudchenko and Drew Brees were married on 8th of February, 2003. In the same year, the newly married couple decided that charitable giving would be a big part of their lives and they founded The Brees Dream Foundation. The sole purpose of this foundation was to provide critical aid to the children who are desperate for cancer treatment and post cancer treatments. Later on, the foundation started expanding its work towards funding cancer research projects, and providing educational help as well as working opportunities to children in need.

In conjunction with The Brees Dream Foundation, the couple has also decided to help their beloved Purdue University in West Lafayette. They have decided to provide financial and charitable help to the University’s Athletic department as well as many of its events. They have contributed nearly $2 Million to Purdue University for the Athletic Program. From the start, this foundation has contributed nearly $4.5 million to the cities of San Diego and New Orleans in the form of donations to charitable causes.

The couple is parents to four adorable children, three boys and a girl. They had their 1st son on 15th January of 2009 and named him as Baylen Robert Brees. Brittany was thirty on the day of her 1st son’s birth. One of the most iconic post-Super Bowl photos included Drew and his oldest son Baylen, a photo that was on the cover of Sports Illustrated. On 19th October 2010, she had her 2nd son and they named him Bowen Christopher Brees. After nearly two years gap in 2012 August 15th, they had their 3rd son and named him Callen Christian Brees. After three continuous sons, Brittany Dudchenko and Drew Brees had their beautiful daughter on 25th August 2015 and named her Rylen Judith Brees.

FAQ: What is Brittany Dudchenko networth in 2020?