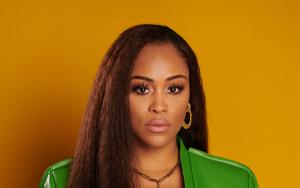 Eve Jihan Cooper, better known by her stage name Eve, is a Philadelphia-based rapper, singer, actor, television hostess, and talk show hostess. Let There Be Eve...Ruff Ryders' First Lady, her debut album, debuted at number one on the Billboard 200 in 1999, making her only the third female rapper to do so.

On November 10, 1978, Eve was born to Julie Wilcher, a publishing firm supervisor, and Jerry Jeffers, a chemical plant supervisor, in Philadelphia.

Eve resided in West Philadelphia until she was 13 years old when her family relocated to Germantown.

She graduated from Philadelphia's Martin Luther, King High School. She was a stripper when she was 18 years old until rapper Mase persuaded her to stop.

Eve talked about stripping in an interview with Rolling Stone in 1999, saying: "That was also a challenge; there's a song on my record called 'Heaven Only Knows' about that. But I don't regret it because I was eighteen at the time, confused and dealing with personal issues. It lasted about a month, and I'm glad I did it. It aided in the discovery of Eve and the establishment of a committed relationship with her. It was distressing to see how many of those young women have three or four children. 'Eve, you don't belong here; this isn't your world,' I'd say as I sat there." Singing was Eve's first musical passion. She sang in several choirs and founded a manager-led all-female singing ensemble (Dope Girl Posse or EDGP). This ensemble covered en Vogue and Color Me Badd songs. Eve went along with the group's manager's suggestion that they start rapping. Eve established a solo career under the moniker "Eve of Destruction" when the group disbanded.

After high school, Eve traveled to New York but worked as a stripper (a part of her life she does not discuss now). Unhappy with her situation, she chose to pursue a career in music. At 18, Eve got a break when friends set up an audition with producer Dr. Dre, who signed her to Aftermath Entertainment under Eve of Destruction. After a few months, she was dropped — "Dre didn't know what to do with me," Eve said Newsweek in 2001 — however a song she recorded for the label ended up on the soundtrack of the 1998 film Bulworth. It was her first real achievement.

Eve was brought to the Ruff Ryders label by Dre's parent label, Interscope, and they signed her up — and worked her hard to prepare her for the big time. She told Vibe magazine, "It was like a boot camp." "They put me through the wringer in terms of being able to write my music, just like the other guys." Ruff Ryders exhibited no intention to handle its first female signing differently from its other performers, including DMX, Jadakiss, and Swizz Beats, in the male-dominated and notoriously misogynistic hip-hop industry. "I've always loved that they never looked at me like, 'Oh, she's the group's girl,'" Eve told uInterview.com, a celebrity news website. "They treated me on an equal footing."

Eve spends equal amounts of time in London, Los Angeles, and New York. In 2010, she began dating Maximillion Cooper. The couple got engaged on December 25, 2013,[92] and married in Ibiza, Spain, on June 14, 2014. Eve has four stepchildren from Cooper's former marriage to Julie Brangstrup, a businesswoman.