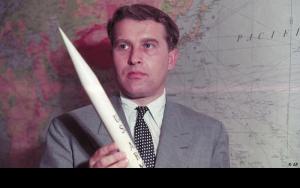 Wernher Magnus Maximilian Freiherr von Braun was a German-born American aerospace engineer and space architect. He was the leading figure in rocket technology development in Nazi Germany and a rocket and space technology pioneer in the United States.

Born into a wealthy family, Wernher received a telescope as a gift from his mother; after that, he developed a passion for space and astronomy from a young age. In 1920, his family transferred to Berlin. He wasn't a very bright student at school but soon became a top student when he encountered Hermann Oberth's book 'The Rocket into Planetary Space' in 1923; it prompted Wernher to master calculus and trigonometry to understand the physics of rocketry.

As a teenager, von Braun garnered interest in space exploration and was heavily involved in the German Society for Space Travel in 1928. To further his desire to build large and capable rockets, in late 1932, he went to work for the German army to develop liquid-fuel missiles. He received a doctorate in physics on July 27, 1934.

In 1924, Wernher, aged 12, disrupted a crowded street by attaching and setting off fireworks on his toy wagon. Apart from having an interest in space, Wernher was a talented musician who played music such as Bach and Beethoven. He always wanted to be a composer but was destined to be excellent in another field.

By 1934, when dictator Adolf Hitler ruled Germany, von Braun's team had successfully launched two rockets that rose more than 1.5 miles. The lack of funding for the projects and dismissal of the German Rocket Society impeeded the continuity of Braun's team's works. The only way open to such research was through the military forces.

So, after 1937, von Braun's team worked at a secret laboratory at Peenemünde on the Baltic coast. The team developed a V–2 ballistic missile, the antecedent of U.S. and Soviet intercontinental ballistic missile and space launch vehicles. The liquid-propellant rocket was 46 feet in length, weighed 27000 pounds, and flew at a speed excess of 3500 miles per hour. It delivered a 2200-pound warhead to a target 200 miles away and was first successfully launched in October 1942 as a target in Western Europe.

Von Braun was a member of the Nazi Party and was an SS officer; his plant used slave labor. By late 1944, it was evident that the allies in the world war would occupy Germany; therefore, von Braun began planning for the postwar era. Braun surrendered to the Americans and his key team leaders in Bavaria before the Allied captured the V–2 rocket complex.

After World War II, Von Braun worked with the U.S Army for fifteen years to develop ballistic missiles as part of a military operation called Project Paperclip. He and a group of 125 others worked and assisted in V–2 launches.

During the 1950s, Von Braun became a prominent advocate for space exploration in the United States. He wrote several books and articles for magazines, also serving as a spokesman for the Walt Disney television program on space travel, 'Man in Space.'

In 1960, with President Eisenhower's direction, his rocket developers' team was transferred to the newly established National Aeronautics and Space Administration, also known as NASA. Wernher became the director of NASA's Marshall Space Flight Center and Saturn V's chief architect– one of NASA's primary objectives that would propel Americans to the Moon. The group worked on Redstone-Mercury, the rocket that sent the first American astronaut, Alan Shepard, on a suborbital flight on May 5, 1961. The successful flight and program made President John F. Kennedy optimistic and challenged America would send a man to the Moon by the end of the decade. And on July 20, 1969 moon landing, the Apollo 11 mission finally fulfilled the challenge of President Kennedy's mission and the lifelong dream of Wernher von Braun's.

Wernher von Braun decided to retire from NASA in 1972 and worked for Fairchild Industries of Germantown, Maryland.

Wernher von Braun died on June 16, 1977, from kidney cancer, aged 65 in Virginia. In his career, he received several awards and U.S. honors worldwide. He also had authored various works on rocket science and physics and is regarded as one of the most significant specialists in rocketry and jet propulsion.

Von Braun was driven by a dream of spaceflight and indeed did fulfill his dream when he lived. He was a German nationalist who effortlessly became an American patriot; many regard him highly. Many feel that he was an opportunist, a man without principles who had no problem building missiles for Germany and America.

It was only after his death; public widely knew about his Nazi links. The Justice Department released records relating to Rudolph, von Braun, and the Mittelbau-Dora camp. Even though communist East Germany tried to leak the connections in the 1960s, it didn't materialize. The works of investigative journalists in the 80s and the scholars in the 90s flashed everything regarding von Brauns Nazi records to the public. The public became aware of the deaths of thousands of prisoners in the V-2 program, von Braun's implications, and other vital associates in crime.

FAQ: What is Wernher von Braun networth in 2020?