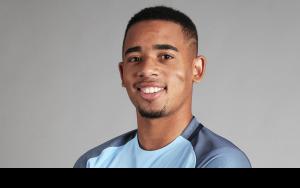 Gabriel Fernando de Jesus was born on April 3, 1997 in Sao Paulo, Brasil. Jesus plays as a forward or winger or attacking midfielder and is renowned for his pace, finishing, and work ethic. He grew up in the neighborhood of Jardim Peri. His parents support him and help Gabriel to achieve his goals. For instance, Jesus’ mother Vera Lucia Diniz de Jesus attends all his matches and gives her son a piece of advice or even admonishments.

Furthermore, once Gabriel Jesus' mother vowed to 'pull his ear' for missing chance at second goal in the Selecao's 2-0 defeat of Venezuela in World Cup qualifying. Vera Lucia influenced his decision to sign a contract with Manchester City. Respect and discipline should not be an issue where Jesus is concerned. Vera Lucia ended up raising her four siblings on her own after Jesus’s father reputedly ran off with another woman. “My son lowers his head when I speak,” she once said.

As for his early biography, after initially playing street football, he joined amateur clubs in the region, his last one being Associacao Atletica Anhanguera. It is hard to believe, but Gabriel Jesus started out as a centre-half. At the age of fourteen, Jesus moved to Anhanguera. He caught the eye early on when he scored 29 goals in a local tournament but it was a friendly against Palmeiras, eight months later that would prove the turning point. Invited for a trial after dominating the game, Palmeiras signed him after one session. He scored 37 goals in 22 matches for Palmeiras and, by early 2015, Oswaldo de Oliveira, then the club’s first-team coach, was convinced he was ready for the seniors.

Jesus made his senior debut on 7 March 2015. Gabriel scored 16 times in 47 league appearances for Palmeiras. He was elected Best Newcomer in the league. In 2016 Manchester City announced that Gabriel Jesus will join the club in January 2017 on a contract until the summer of 2021. This transfer was really unexpected for the whole football community. City will pay a reported fee of £27 million/€33 million, plus add-ons. According to 2016 information, Gabriel Jesus’ net worth is about $900 thousand, but this sum is not proved by his official representatives.

Gabriel Jesus’ performances on the international stage have been outstanding. Jesus was part of the Brazil under-20 team that finished as runners-up at the 2015 World Cup in New Zealand. He scored their first goal of the tournament in a 4–2 win over Nigeria. In 2016, he was chosen in Dunga's provisional 40-man squad for the Copa America Centenario in the USA. In a year, Gabriel was one of five forwards named in the squad for the team's hosting of the Olympic tournament. He scored in their final group game against Denmark. Jesus's debut in the senior team was on 1 September 2016, in a 2018 FIFA World Cup qualification game against Ecuador in Quito. He started the match and scored twice in the last three minutes.

FAQ: How old is Gabriel Jesus?

FAQ: What is Gabriel Jesus networth in 2020?