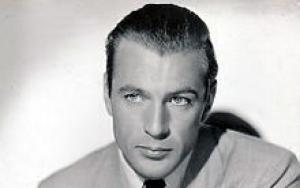 Gary Cooper was known as an American actor. He is most famous for his roles in High Noon and Sergeant York.

Gary Cooper was born as Frank James Cooper on May 7, 1901. He passed away on May 13, 1961. He was raised in Helena, Montana. He attended primary school for a couple of years at Dunstable Grammar School. Then he studied at the Johnson Grammar School in Helena. He continued his education at Helena High School and later left it to return to the family ranch to help raise cattle. He learned a lot of valuable work lessons as a cowboy. He finished his high school education at Gallatin County High School. He took three art courses at Montana Agricultural College. Then he moved to Lowa State to continue his art education. In the early 20s, he served as a tour guide in the Yellowstone National Park.

In 1925, Gary Cooper moved to California, where he started his acting career by working for silent pictures. He made his first appearances in such movies as “The Thundering Herd”, “Riders of the Purple Sage”, “The Lucky Horseshoe” and “The Trail Rider”. In that period he had just minor roles, so he decided to become an agent for the film director Nan Collins to get some more experience. He played a character named Abe Lee in the 1926 movie “The Winning of Barbara Worth”, which was his first main role. Later he appeared in a film where he got to use his youthful roots as a cowboy. The film brought him to a high level of success. Afterward, he signed a 5 year deal with Jesse L.

Gary Cooper tasted success again in 1929 after his first sound picture was released. It was titled “The Virginian”. In the middle of the 30s, Paramount made a contract for him with a salary of $8 thousand per week. Since then he has made his appearance in numerous movies like “Mr. Deeds Goes to Town”, “The Adventures of Marco Polo”, “The Pride of the Yankees”, “The Story of Dr. Wassell” and “It's a Big Country”. In the 1940s he returned to the western genre with the movie “The Westerner”.

In 1960, he was honored with a star on the Hollywood Walk of Fame. He was a three-time Academy Award winner in 1942, 1953 and 1961. During the last half of his career, he appeared in such motion pictures as “The Wreck of the Mary Deare”, “Blowing Wild”, “Garden of Evil”, “They Came to Cordura” and “Return to Paradise”.

Gary Cooper was married to Veronica Balfe. The couple tied their married knots in 1933. Their only child, a daughter named Maria Veronica Cooper was born on September 15, 1937. He separated with his wife on May 16, 1951, when Cooper moved out of their family house. Their reconciliation occurred in February of 1954. Previous to his marriage, he also had a relationship with such popular actresses like Clara Bow, Evelyn Brent, Marlene Dietrich, and Lupe Velez.

Gary Cooper died in 1961 because of a long period of illness from prostate cancer.

FAQ: How old is Gary Cooper ?