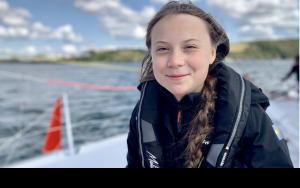 Greta Thunberg is an environmental activist internationally known for challenging World leaders to take immediate and extreme action to fight climate change in 2018.

Thunberg was born on January 3, 2003, in Stockholm, Sweden. Greta's mother, Malena Ernman, is an opera singer and a former Eurovision Song Contest participant, and her father, Svante Thunberg, is an actor. Greta Thunberg is distantly related to Svante Arrhenius, a scientist who was awarded the Nobel Prize for Chemistry in 1903 to develop a greenhouse effect model.

Greta's younger sister, Beata, is a famous singer in Sweden. Both Greta and her sister suffer from disorders like ADHD and OCD. Greta, who has Asperger's syndrome, describes her development disorder as a gift.

Thunberg realized the threat of global warming from the age of eight and was worried about the lack of action implemented to prevent it, making her depressed. Greta, due to her conditions she was shy and quiet at school.

She developed a condition of 'selective mutism,' which forces her to speak less and often not talk completely. She said speaking and protesting about climate change and environmental issues helped her overcome or deal with depression and inner turmoil.

Her activism's early target was her parents; her father recalls her unmatched persistence and enthusiasm in discussing environmental issues. She would rebuttal their discussion with data and graphs, and over the years, they ran out of arguments.

Greta's parents realized that her activism was a way out of her depression and was happy to let her be devoted to the cause. Greta said that having this innate power to induce her parents to care about the environment and the climate gave her the confidence to do something with her life.

The Start of her Campaigning

Greta learned about climate change when she was eight, and her parents were never climate activists. In May 2018, aged 15, Greta participated and won an essay competition in a local newspaper contest, where she wrote an essay about climate change. Greta then attended a meeting with Fossil Free Dalsland, an environmental group committed to taking action against climate change. She felt that she could contribute to the raise awareness by leading a school strike —an idea she got students who refused to return to school after another fatal shooting at Parkland, Florida. None of the school students wished to participate in her movement, so Greta started protesting alone in front of the Swedish parliament building urging the government to meet the world leaders' carbon emission target in Paris in 2015. Until the fulfillment of the agreement, she vowed to keep on protesting.

Through her movement, she urged students worldwide to join her, holding signs that read "School Strike for Climate." She usually protested on Fridays, skipping school, and it became a regular activity. She protested every Friday traveling to the Swedish Parliament, and she covered her schoolwork and her homework on the other days. Despite missing school and devoting her significant time to raising awareness of environmental issues, writing articles and speeches, she was still the top 5 students of her class.

Her protest started becoming viral on social media. Her support for the cause grew bigger and bigger, instigating other strikes to spread worldwide, using the hashtag #FridayForFuture making her the spokesperson for an environmental reason and global warming in particular.

By December 2018, more than 20000 students joined her in countries like Australia, the UK, Belgium, the USA, and Japan.

Greta spent the whole of 2019 off school attending key climate conferences and joining student protests worldwide. In September 2019, she traveled to New York to address a UN climate conference. Her influence had grown by the time, and her arrival led millions of people worldwide to take part in climate strikes.

Her speech at the conference went viral where she said, "How dare you? You have stolen my dreams and my childhood with your empty words." Her speech was very significant, and it garnered assurances from world leaders to take the matter seriously. She was named Time Magazine's Person of the Year.

FAQ: What is Greta Thunberg networth in 2020?