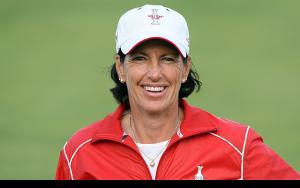 Juli Inkster (maiden name Simpson) was born in 1960, June 24 in Santa Cruz, California. After finishing high school, she attended San Jose University. But the education was not for her as she felt the passion for golf very few people have. She spent her time playing the sport in local golf pitches and decided that is what she wanted to do for the rest of her life. She started taking golf more seriously every day and became one of the best the game has ever seen.

After finishing Harbor High School, Juli began her amateur career by playing college golf. She immediately got attention from the media and her peers while at the College and was considered to be one of the biggest talents golf has ever seen. Her university declared her to be an athlete of the year in 1981. Juli Inkster managed to win 3 amateur female golf tournaments before becoming a professional among her other victories during the period from 1979 to 1982.

Juli Inkster became a pro in 1983 during her first year in a pro golfing world. She immediately got a title by winning Safeco Classic. The following year she was victorious in two championships and it is not a surprise that she was declared Rookie of the Year by the LPGA. During her career, Inkster has won over 30 LPGA tournaments and in 2012 she was the fifth in terms of money earned by winning in female golf tournaments. Despite her numerous victories throughout the year, she never managed to be on the top of earnings list. Her greatest achievements were in 1999, when she managed to get a second place and in 1986 and 2002 where she finished the season in the third spot. She also has quite a lot of victories in team games of golf. In 1999 she was declared the best woman athlete of the United States. Inkster had a long and vivid career as a female golfer but unfortunately, she had suffered a big blow in 2011 when she injured one of her elbows. After the scan, doctors declared that she will need a surgery and this resulted in her missing the entirety of 2012 season. However, she did manage to recover from her incident and is still going as strong as ever, though she recently revealed that with the age her injury is taking more of a toll on her every day.

Juli Inkster also did some broadcasting. She worked as a commentator for Golf Channel where she analyzed the game and took interviews from people involved with the game. She did not mention whether she plans to go on TV full-time after ending her career, but you never know what might happen.

Juli got married to Brian Inkster in 1980 and her husband and she has two children – Cori and Hayley.

Juli is believed to have a net worth of about 13 million dollars.

The golfer joined Twitter in 2012 and has almost 10 thousand followers.

Juli Inkster is without a doubt one of the greatest in the sport. It seems that her career is coming to the end as she recently entered her 50's but it would not be surprising that she is going to continue her work as a commentator and an analyst because her experience and passion for the game are second to none.

FAQ: How old is Juli Inkster?