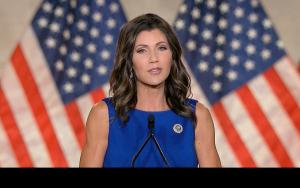 Noem was elected as a Trump friend and has continuously supported his agenda. During the COVID-19 pandemic, she deliberately refused to heed medical experts' advice and did not establish any of the customary public health and safety safeguards in place in other jurisdictions. Noem opposed face mask mandates, questioned the efficacy of mask use, supported big meetings without social distance or mask use, and questioned the opinion of public health specialists.

Kristi Noem was born in Watertown, South Dakota, to Ron and Corinne Arnold on November 30, 1971. She grew up on their family ranch and farm in rural Hamlin County with her brothers.

She is of Norwegian descent.

Noem won the South Dakota Snow Queen title after graduating from Hamlin High School in 1990. She attributes the experience to help her improve her public speaking and marketing abilities.

Noem attended Northern State University from 1990 to 1994 after graduating from high school. In 1992, at the age of 20, she married Bryon Noem in Watertown, South Dakota.

In a farm machinery accident, Noem's father was killed.

Noem expanded the family's property by building a hunting lodge and a café. Her siblings returned to help with the business expansion. After her father died, Noem took classes at Mount Marty College in Watertown and South Dakota State University and online courses from South Dakota.

House of Representatives of South Dakota

Noem was elected to the South Dakota House of Representatives as a Republican in 2006, representing the 6th District (comprising parts of Beadle, Clark, Codington, Hamlin, and Kingsbury counties, but not including Watertown). With 39% of the vote in 2006, she was elected. She was re-elected to a second term in 2008 with 41% of the vote.

Noem was a member of the House of Representatives for four years, from 2007 to 2010, and was an Assistant Majority Leader during her final year.

She sponsored legislation in 2009 and 2010 to lower the compulsory schooling age in South Dakota from 18 to 16, after it had been raised to 18 in 2008, stating that forcing students to attend school until they are 18 has not been demonstrated to improve graduation rates.

She was a member of the State Affairs and Taxation Committees.

Noem has maintained a hands-off stance during the COVID-19 outbreak in South Dakota. In November 2020, she used pandemic relief funding to promote tourism during a spike in cases in the state. She did not impose mask requirements, questioned the efficacy of mask use, encouraged big meetings without social distance or mask use, and questioned public health professionals' advice. She was one of the few governors who has not issued nationwide stay-at-home orders or face-mask restrictions as of December 2020. Trump's language and handling of COVID-19 were matched in her answerSouth Dakota had one of the most significant outbreaks in the U.S.

Bryon Noem is Noem's husband. They are the parents of three children. Noem's family remained on a ranch outside Castlewood, South Dakota when she went to Washington in 2011 to take up her congressional seat. Noem is a devout Christian.

Her family was a member of a Foursquare Church in Watertown, South Dakota, as of 2018.