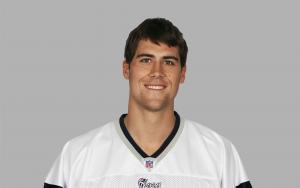 Matthew Brennan Cassel is a 33 years old professional American football player. He was born on the 17th of May, 1982. His home town is Northridge, located in the state of California in the United States of America. He occupies the position of a quarterback and surely does have impressive stats over the course of his professional career.

When he was attending high-school it seemed at first that Matt was more into baseball than into football. He was on the starting roster, occupying the position of first basemen on the Northridge team which even managed to reach the finals of the Little League World Series which took part in 1994 – a baseball championship for minors. However, at Chatsworth High School he used to play both baseball and football. During his senior year he got ranked number eight quarterback and he was also the 53rd of the best players in the nation on a high-school level.

It was back in 2001 when the college career of Matt took off. However, for a significant amount of time Cassel was on the bench behind Carson Palmer and matt Leinart. He failed to win a position in the starting roster and as a result he had to play tight end and wide receiver during 2003. He even played baseball for one season back in 2004. He played in a total of 8 games but he only started in one of them.

Even though his former coach advised Matt to start as undrafted free agent, he got the 230th overall pick in the seventh round of the 2005 NFL draft. He got drafted by the team of the New England Patriots. He started off the 2005 season by being third on the team’s depth chart. He was behind Tom Brady and Doug Flutie. Cassel made his first professional appearance on the 2nd of October in the final minutes of the game between the Patriots and the Chargers of San Diego. Cassel would go on to spend 4 more years playing for the New England Patriots.

It was on the 28th of February, 2009 when Cassel was traded to the team of Kansas City Chiefs. He had a few unfortunate health related issues and he suffered from an injury that got him benched and placed as an injured reserve. Matt would go on to play 2 seasons for the Minnesota Vikings, signing a two-year contract worth $10 million with them. In 2015 he got traded to the Buffalo Bills on the 10th of March, 2015 and later on he got traded to the Dallas Cowboys on the 22nd of September, 2015.

Matthew married Lauren Killian – his long time girlfriend. She is a former volleyball player for the USC. Interestingly enough his best man was his former teammate Carson Palmer. Cassel’s older brother Jack is married to his wife’s old roommate – Julie Mariani, who also used to be a USC volleyball player. His mother is Barbara Cassel – a set decorator who managed to win an Emmy award. She and his father – Greg Cassel divorced back when he was only 14 years old. Matt’s father passed away on the 8th of December, 2008.

FAQ: How old is Matt Cassel?

Quick Facts
Help us Edit this article and get a chance to win a $50 Amazon Gift card.
Last Modified: Apr 19 2020
You may also like
articles you may like