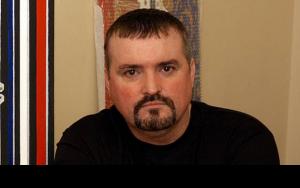 Michael Stone was born April 2, 1955. He has five non-biological siblings: John, Rosemary, Colleen, Sharon, and Shirley. He enrolled in the Army Cadet Force at age fourteen where he received firearm training. He was expelled a year and a half later, however, after many playground fights. He began entry level work as a "hammer boy" in a shipyard, but was ultimately resigned after a suspension and fight with a coworker.

In 1970 he established the Hole in the Wall Gang. The group wore blue jeans and Dr. Martens. The next year he joined a "Tartan Gang" known for attacking Catholic youths and vandalizing Catholic buildings. He met Tommy Herron and became involved with the Ulster Defence Association East Belfast Brigade. He was involved mostly with stealing and served six months for the theft of guns and ammunition from a sports shop and later, a car. After Tommy's death in 1973, Stone left the group, but returned in 1984. He was welcomed by John McMichael who provided Stone with guns and hit-list of high-profile Irish republican targets. The first murder was committed on November 16, 1984 when Stone shot Patrick Brady. He also killed Kevin McPolin in November 1985. Although he claimed he did not kill Dermot Hacket in 1987, he confessed to the murder in order to protect another gang member.

He was released from prison in July of 2000 under the Good Friday Agreement. He married and divorced twice and has nine children. He temporarily became an artist and later fled Ireland for France when facing death threats. He was rearrested in November of 2006 attempting to enter Parliament buildings with weapons, which he claimed was an act of performance art. Two years later in 2008 was found guilty of attempted murder of Gerry Adams and Martin McGuinness and received a 16 year sentence. This was extended 18 further years in 2013 for the Milltown cemetary killings of 1988.

FAQ: What is Michael Stone networth in 2020?