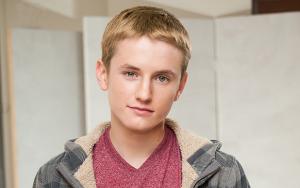 I want to keep on progressing. I definitely think acting is a long process to be one of the greats like Morgan Freeman or Jack Nicholson.

Born to act, American teen actor Nathan Gamble is truly a big name in Hollywood. He is especially known for his roles in big feature films such as Babel, The Dark Knight and Dolphis Tale franchise.

Born on January 12, 1998 in Tacoma, Washington, US to theatre directors and actors parents, Nathan Gamble started his on-screen career at the age of 8 portraying the son of Bradd Pitt's character in the super hit 2006 drama film 'Babel".

Now moving on to his physique, Nathan possesses height of 5 feet and 4 inches. Since he is still in his growing years, he will certainly gain more height in coming years. Nevertheless, the 18 years old naturally blonde star may not be best looking person in the showbiz, but he is definitely a talented  and good looking star who has earned tremendous success in short period of time.

Personality wise, he is generally referred to as by the words such as  expressive, humorous and geeky.

"Would you kindly watch me act? I'm an amateur dolphin rider, and professional procrastinator. I was young and needed the money.

Nevertheless, Nathan has two sisters, theatre actress  Danielle who is 24 year old and 14 year old Laura who wants to be a veterinarian. Inspiringly, he is someone who is proud of his roots and opposite to Hollywood lifestyle. If you don't know, he enjoys a farm like atmosphere in his home, thanks to company of several loveable animals such as dog, cats, chicken and rabbit.

Interestingly, the California high school pass out didn't know about Brad Pitt stardom when he joined the set of Babel. Nonetheless, several websites has reported that he was more interested in going to the beach than the audition of the Babel in the audition day.

Remarkably, Nathan understands the fragile nature of Hollywood's popularity. He thinks that he can stay for a long time in Hollywood even if his acting job ends because of his interest in writing and editing. Growing up in a family of actors and theatre producers, Nathan feels that he has learned an important lesson. He believes in looking and analyzing jobs of other actors and self improvising his learning. He doesn't believe in asking suggestions to other stars as that may be too irritating.

Nathan says if he wasn't an actor, he would probably be perusing career in football weather that be as a player or football announcer. Moreover, he also feels he can excel as a radio talk show host.

When he is not acting, he likes to spend time playing video games, following sea hawks and enjoying with friends and family.

Unfortunately, his net worth is not known. However, we can easily speculate that he is worth high given his successful career. He has appeared in several reputed television series and movies. Inspiringly, he learned swimming for Dolphin Tale franchise despite of being an asthma patient. We can surely learn a lot from him.

Last but not the least, the American actor of white ethnicity used to make videos in collaboration with his friend on YouTube under Youtube channel studioling. His Youtube handle was n-game.

Some interesting quotes of Nathan:

"If you want to be an actor you really have to be passionate about it, and you have develop a tough skin,” Nathan said. “You’ll be told to change your appearance, to change your name. You have to accept rejection and move on."

"Ever since I was a kid, I have loved making people laugh. I used to run full speed into walls and pretend I was George of the Jungle, “Watch out for that tree!” But, it’s odd, as most of the roles I’ve done have been serious or sad characters. Oh well, someday I’ll do comedy!"

"Well, truth be told, my first role on stage was before I was even born. My parents were in a production of Christmas Carol and I was in my mom’s tummy waiting to come out. My mom said when she went out for curtain call she could feel me flipping around, like I was doing a curtain call myself! So, yeah, I think I was destined to be an actor. Make people laugh "

FAQ: How old is Nathan Gamble?

FAQ: What is Nathan Gamble networth in 2020?