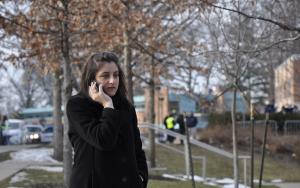 Sara Ganim, 25 finished her graduation at the Penn State University in the year 2008. She studied journalism there. She has been a news reporter since her high school days. During her college studies, she worked as reporter for the ‘Centre Daily Times’. She spends the major part of her time on researching and reporting news stories.

Before joining CNN in the year 2012, Ganim worked at The Patriot News situated in Harrisburg. It was during her stint there that she unearthed the story of Sandusky, a former defensive coordinator at the Penn State University football program. She had reported on the child abuse, which won her the Pulitzer Prize in 2012. Ganim is credited for taking the story and pushing it into the national arena bringing it to attention. She is also known due to her on-air contribution for HLN, CNN and In Session during the trial and the subsequent conviction of the Sandusky case in addition to her work as print journalist.

Sara Ganim has made great strides in journalism in a very short span of time. She is the youngest journalist to receive the Pulitzer Prize. She was 24 years old when she was honored with the award. She has also won the George Polk Award in journalism and the Sidney Award for socially conscious journalism. She has also been honored by Alumni Society Board of the College of Communications in the year 2012.

Sara Ganim has been hailed as a multitalented and relentless reporter. It has been said it was her unerring instincts and robust questioning while she covered the Sandusky trial that led her win the highly coveted Pulitzer award. Sara Ganim has in her website quoted that she always wakes up to morning news and spends most of her waking hours digging, investigating, and chatting up sources till she is convinced about having the entire picture on a particular story.