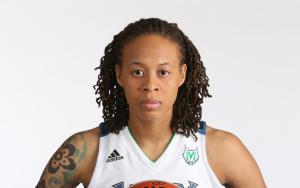 The complete name of Seimone Augustus is Seimone Delicia Augustus. She lives in America. She is a woman basketball player in the WNBA (Women’s National Basketball Association).  She plays with the different clubs and the U.S. National team. Seimone Augustus was born on 30 April, 1984 in Baton Rouge, Louisiana. Her mother is Kim Augustus and father is Seymore Augustus.  Augustus completed her high school education from Capitol High School.  She also played for this school. She studied at LSU College, Louisiana State University. Augustus diagnosed with fibroids. Her mother and grandmother also had this problem. She had been through a surgery for it in 2010 at Fairview Southdale Hospital. Doctors had to remove her uterus but she can still have children through surrogacy cause her ovaries were not even touched and left in a good condition.

In the first year of school, Seimone got to be on the cover of a Sports Magazine named Sports Illustrated. When she played for her High School, was awarded as WBCA All-American. WBCA is Women’s Basketball Coaches Association, which sponsors games. In college she played with the LSU Lady Tigers and won the Naismith College Player of the Year, Wooden Award and Wade Trophy in 2005 and 2006. After winning the Lowe’s Senior CLASS Award in her last year she got recognition as top senior women’s basketball player at national level. At the school Seimone got the uniform number 33 which was respectfully withdrew in year 2010. So she is the first women athlete in school history who got this honor.

Seimone Augustus, a talented basketball player has a 6-0 height. In 2006 WNBA Draft, she was No. 1 overall. Seimone was awarded the 2006 WNBA Rookie of the Year. She got a torn Anterior Cruciate Ligament at the end of the season 2009. According to her biography, in 2010, she needed to go for a surgery to remove fibroids. Fibroid is a condition when non-cancer tumors grow in a woman’s uterus. Seimone had a tumor big as a baby’s head. In 2011, Seimone returned with full power and played as the team’s lead defender in Lynx team. Seimone was voted a star-game starter in year 2013. Augustus also played for Dynamo Moscow Club from Russia and for Galatasaray club from Turkey in Euro Cup. In year 2008 Summer Olympics, she won a gold medal.

Seimone Augustus gets a high payment for her game. She is one of the highly paid basketball players. Her salary in year 2015 is $270,000 and the net worth is 2,430,000 USD. Augustus WNBA stats could be seen on internet. Her whole official game record is available. Her biography is available on Wikipedia and on some other sites. There is a fact known to all that Seimone is a lesbian. Seimone and her girlfriend LaTaya Verner got engaged in 2010 and 2015 they got married in Hawaii. Well, a sweet, interesting thing that Seimone asked her fiancée to wear sneakers in the wedding ceremony.  Hope there are still records to achieve by her in basketball court.

FAQ: How old is Seimone Augustus?

FAQ: What is Seimone Augustus networth in 2020?