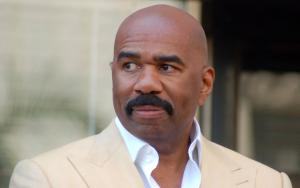 Homeless man turned one-hundred million Richey-Rich, Welch native Broderick  Steven "Steve Harvey (born on January, 7, 1957) is a multidimensional personality. The accomplished man is not only celebrated as a top-notch comedian, but also worshiped for his amazing credentials as an actor, author and radio personality.

Prior to being famous, he experienced various jobs such as boxer, insurance salesman, carpet cleaner and mail cleaner.

Now moving on to his physical configuration, the 58 years old actor is a tall man with the height of 6 feet and 2 inches. Anyway, he may not have the perfect body, but he looks fit and fine for his age. And why shouldn't he?

The "King of comedy" got serious about his health and actually invented the "50 and Fly Campagain" after turning fifty. Amazingly, he brought the campaign into existence in collaboration with Former Mr. Olympia Lee Haney.

Of course, as the initiator of the campaign which vision exactly being “encouraging men aged 40 and older to tone up, slim down, eat right, and, most importantly, stop using age as an excuse to let themselves go”, Steve had to  take leadership first and inspire his fans by following a smart diet and exercise plans which he did.

Following Haney's expertise, he then went through a circuit training program using functional movements and a strict diet plan that included two philosophies;

2.   “Stimulate, Don’t Annihilate.”(Translation: You don’t have to tear up your muscles to see results.)

From what we have heard, he now follows following exercise routines and diet plans;

d. It's no wonder he has lost a good amount of weight in the past.

a.  Breakfast (a bowl of cereals with milk and honey and garnished with strawberries along with cherries)

c.  Lunch (fried chicken with hot oven bread slices and a bowl of green vegetables which include beans, carrots, potatoes and kale.)

e.  Dinner (salmon prepared with little olive oil, along with bowl of beans with black pepper, salt and lemon squeezed over it. Dessert is lime pie but in moderation)

Except these workouts, he rides a stationary bike everyday during his four hours radio show. Moreover, from his Facebook, we also came to know that he also follows the thirty day transformation team of Kathy and Luther Freeman. Nonetheless, he has also managed to welcome various fitness masters in his Emmy award winning talk variety show Steve Harvey. With such level of fitness exposure, fitness conscious Steve confidently posed shirtless initiating the campaign "Take  Your Shirt Off"  along with his The Steve Harvey Morning Show casts in the year 2008.

Talking about his relationship status, he is a committed man. Anyway, his current wife name is Marjorie Harvey.  Steve and Marjorie married in the year 2007. His previous wives were Marcia Harvey (first wife) and Maria Shackelford (second wife). Moreover, he has seven children in total.

According to Seteve, his first marriage failed because it was a marriage featuring two immature person. He has said he wasn't man enough then.

His second marriage failed because he and his second wife were completely opposite to one another.

However, for him, his third marriage is the best thing that can happen to a man. Steve often praises Majorie for making his life better and changing his life. Nevertheless, Steve had four children and Majorie had three when they got married.

Three time Daytime-Emmy Award Winner and 11-time NAACP Image Award winner, Steve Harvey, a bald man who dislikes atheist, is best known as the super-host of a famous line of shows such as The Steve Harvey Morning Show, Steve Harvey and Family Feud.

FAQ: How old is Steve Harvey?