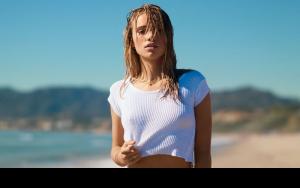 Suki Waterhouse, born January 5, 1992, is an English actress, model, and business opportunist. Born in Hammersmith, London, she was the daughter of Elizabeth Waterhouse and Norman Waterhouse, both who worked in the medical field. Suki began her career as a model when she was 16 and became a lingerie model for Marks and Spencer at the age of 19. She became the face of Burberry and Redken and modeled for other companies such as H&M, Coast, Max Studio, Tommy Hilfiger, Pepe Jeans, among many others. She has posed for nude modeling in the photography exhibit by Dominic Jones Jewelry’s autumn/winter campaign at London Fashion Week.

In 2015, Suki turned towards acting and held a role in the romantic thriller “The Bad Batch.” Making subsequent appearances in “Billionaire Boys Club” (2016) and held the leading role in “The Girl” (2017). Despite her upward career in film, turned her career focus towards business, launching Pop & Suki, which has been used in famous magazines such as Vogue, Harper’s Bazaar, W Magazine, and Elle Magazine. Her accessories are geared towards Millennial audiences, and she has enjoyed relative success in her business undertaking.

FAQ: How old is Suki Waterhouse?