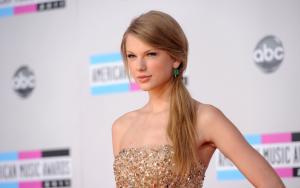 Taylor Swift is a Grammy Award Winning singer and songwriter who is one of the top artists of all time. She is one of the biggest world celebrity and has massive fan following all over the world. Born on 13th of December 1989 in Pennsylvania, Taylor Swift's family shifted from Wyomissing when Taylor started her music career at the age of 5.

At the age of 16, she released her debut album which became massive hits all over the world. Her songs like "You Belong with me" and "Love Story" are still considered as best songs of all time.

Taylor Swift belonged to a Christian family and spent her early days at her families Christmas tree farm at Wyomissing. Taylor's grandmother was a professional opera singer and was a childhood inspiration for her. As early as at 10 she started to sing in local events and was fairly popular in her childhood. She sang "The star spangled banner" at the age of 11 she started writing her own songs and even learned guitar.

Pursuing her career in music she regularly came at many music schools and Tennessee which is the country music special. It was there where she was co-writer of many songs and also landed her first professional job. Looking at her dedication and love for music her family moved to Tennesse for the purpose of enriching her career.

For launching her career Taylor started to work at the Bluebird Cafe and other events where she landed a big contract with the Scott Borchetta's company and started her journey of success. She launched her first record "Tim McGraw" in the year 2006 which became a big hit and topped the country charts. The song was also released on her debut album in the October of which more than 2 million copies were sold.

Swift received a lot of critical praise for debut album for which she also won a Horizon Award from CMA (Country Music Association). In 2008, Swift released Fearless which also received a lot of positive response from critics and crowd. It was around the same time that she released another album which also rocked the charts and became the highest selling album of the year.

In the year 2014, Swift won her first Granny for 1989 and many more awards. Her track Shake it off proved to be one of the top chartbusters of the year and her songs reached to the top of the ladder. Swift continued to make her public relation with her track Bad Blood which also featured Kendrick Lamar. It is her dedication and hard work which have made her huge celebrity and gave her the top position and lots of net worth.

Taylor Swift was also very active in her personal life and her relations need a special mention in her biography. She has gone on record and stated that most of her songs are inspired from her break up. She first started dating Joe Jonas from Jonas Brother, got engaged to Tom Hiddleton. After that she was involved with Taylor Lautner, John Mayer, Cpry Monteith, Conor Kennedy and Calvin Harris.

FAQ: How old is Taylor Swift?