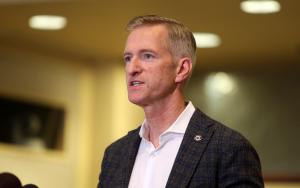 Edward Tevis Wheeler is the mayor of Portland, Oregon, and has held the position since 2017. From 2010 until 2016, he served as Oregon's State Treasurer.

Wheeler was elected mayor of Portland in 2016 and re-elected in 2020. He used to be a registered Republican but now identifies as a moderate Democrat.

Ted Wheeler was born on August 31, 1962, in Portland, Oregon, United States. Edward Tevis Wheeler is his given name. His three siblings are Sam Wheeler, his father, Leslie Wheeler, his mother, Tom Wheeler, John Wheeler, and Chuck Wheeler. He is of Caucasian ethnicity and maintains an American nationality.

Before entering politics, he worked for several financial services firms, including Bank of America and Copper Mountain Trust.

He was elected Multnomah County's top executive in 2006.

On March 9, 2010, he was appointed as Oregon State Treasurer, succeeding Ben Westlund, who died of lung cancer.

He was re-elected to a full term in the Oregon state elections in 2012.

He ran for Mayor of Portland in 2015 and won the election with more than 50% of the vote in the primary.

Ben Westlund, the incumbent Oregon State Treasurer, died of lung cancer on March 7, 2010. Governor Ted Kulongoski appointed Wheeler to the position two days later. Wheeler defeated fellow Democrat Rick Metsger in the Democratic primary election on May 18, 2010, and then defeated Republican Chris Telfer, Progressive Walt Brown, and Constitution Party's Michael Marsh in the November special election to complete Westlund's term, which expired in 2013. In the 2012 Oregon state elections, he was re-elected to a second full term.

Since 2013, Wheeler has saved more than $172 million in cash flow because of his proactive financial management. He advocated for environmental stewardship, promising to quadruple Oregon's renewable energy investments by January 2020 and double them by 2030. Wheeler also stated that he would not pursue new coal investments. To improve long-term performance, he advocated for the use of ESG (Environmental Social Governance) in all state investments, and he encouraged the Securities and Exchange Commission to conduct harsher reviews of 45 major firms' carbon asset risk disclosures.

Wheeler served as chair of the Oregon Retirement Savings Task Force, which created the OregonSaves program to help Oregon people save for retirement.

It increased Oregon's pension fund to more than $72 billion, making it one of the country's top five state pension funds.

Wheeler, his wife, and their daughter lived in Southwest Portland. He moved into an apartment in Northwest Portland after his divorce. He summited Mount Everest in 2002 as an Eagle Scout and passionate outdoorsman.

Wheeler is an Episcopalian who attends services at Trinity Episcopal Cathedral on occasion.

Wheeler pepper-sprayed a man who attacked him and former mayor Sam Adams as they left a bar in Southwest Portland on January 24, 2021, during the COVID-19 pandemic. The guy, identified by police as Cary Cadonau, a Portland lawyer and Alpenrose Dairy heir, was not wearing a mask and shouted at the mayor from less than 2 feet (0.61 m) away; when he refused to back off when ordered, Wheeler pepper-sprayed him.