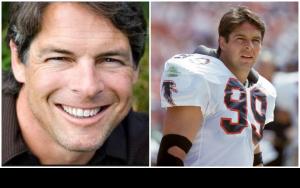 Tim Green is known as a retired professional American football player, a media personality, and a best-selling author. He is most famous for his books like The Big Game and Football Hero.

Timothy John Green was born on December 16, 1963 in Liverpool, New York. Subsequent to studying writing at Syracuse University where he was an All American football player, Tim was drafted in the first round of the NFL draft by the Atlanta Falcons where he was a top defensive player for a long time.

While Tim played in the NFL, he likewise studied law and started his writing career. When he resigned from football in 1994, Tim had effectively distributed his first book and become a legal advisor. Notwithstanding those two employments, he started working as a TV broadcaster for FOX NFL Sunday and different shows, including Battlebots, Good Morning America, Court TV, A Current Affair, and Find My Family.

Subsequent to writing in excess of twelve books for adults, Tim started writing a series of books for youthful readers set in a universe of sports taken from his very own encounters as a competitor and a coach. Since that time, he has made in excess of 1200 school visits and addressed almost a half million children over the United States, conveying a ground-breaking message about the significance of education, reading books, and great character. Despite the fact that his own youth dream was to turn into a NFL player, he had another fantasy similarly as incredible to turn into a writer. He currently urges children to put school before sports and to consider achievements like strong relations with friends and family instead of fortune and notoriety. Originating from a competitor who understood his fantasies of turning into a school All-American and signing a first-round draft pick million dollar contract, his message is highly inspirational. He has utilized each penny of his talking expenses to purchase duplicates of his books for children, libraries, and schools who usually wouldn't be able to manage the cost of them.

In August 2019, Tim said that he had issues dealing with ALS and believes he developed the condition because of his football playing career. Tim currently serves on the leading group of the Golisano Children's Hospital in Syracuse, NY, just as the National Writing Project.

Tim lives with his better half, Illyssa, their five children, and three canines in Upstate New York. When Tim isn't writing, he appreciates spending time with his family in activities like sailing, angling, running, and swimming.