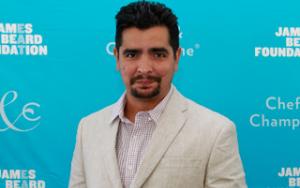 Aarón Sanchez was born in the year 1976 on the 12th day of February in El Paso, Texas. His age is 40 years. Aarón Sanchez has a twin brother Rodrigo, who works as an attorney in New York City. Her father name is Adolfo Sanchez, and her mother name is Zarela Martinez. Her mother wrote various cookbooks and is a restaurateur. Since his childhood, he was fascinating towards cooking and helper her mother in her catering business by cooking Mexican food. Sanchez family moved to New York in 1984. He is a chef and a famous television personality. He is a citizen of United States.

He did his graduation from The Dwight School in 1994. He studied culinary arts at Johnson & Wales University in Providence, Rhode Island.

Aarón Sanchez is a part owner and serves as an executive chef at Johnny Sánchez with its branches in Baltimore, Maryland and New Orleans, Louisiana. During his childhood, he started working. He began working professionally at Café Marimba, launched by her mother in 1984. When we were 16 years old, his mother sends him to work under Chef Paul Prudhomme. He joined L-Ray, famous for Caribbean and Mexican cuisine, as an executive chef. Later he joined the restaurant Isla as an executive chef. Aarón Sanchez also worked at Rose Pistola in San Francisco under the direction of Chef Reed Hearon. Later he opened Paloma, a Latin restaurant in Stamford. Again in joint partnership with Chef John Besh, in August 2014, he opened Johnny Sanchez in Baltimore, Maryland.

Aarón Sanchez has been featured on various cookery and food recipes shows such as Chopped, Throwdown! With Bobby Flay, Iron Chef America, Chefs vs. City, The Taste, and The Next Iron Chef. He was also featured as an anchor in the shows Aaron loves New York and Taco Trip. He also hosted 3 Minutos con Aarón and Motochefs, which are Spanish shows telecasted on Fox Life. He was invited as a guest chef at the White House and has been awarded James Beard Award for Television Studio Program. He has also written two recipe book. “La Comida del Barrio”, the first recipe book was published in May 2003, and “Simple Food, Big Flavor: Unforgettable Mexican-Inspired Recipes from My Kitchen to Yours”, the second recipe book was issued in 2011.

Aarón Sanchez is currently single, and no rumors are available about his past and present affairs in the media. Aarón Sanchez was earlier married to Ife Mora in 2009 in a private ceremony. Before marriage, both of them were dating each other. Their marriage hold for three years and later his wife Ife Mora filed for divorce. They were officially separated in the year 2012. Aarón Sanchez has two kids. His son name is Yuma Sanchez and Sofia Piana is his step daughter’s name. Both the kids are staying with him I United States. He is charming and good looking. Information about his salary is not available publically. However, is actually estimated to have a $4 million net worth.

FAQ: How old is Aaron Sanchez?