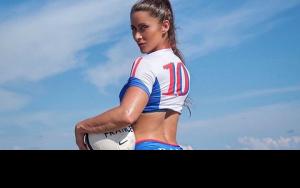 Anais Zanotti is a French model, stunt woman, and certified skydiver. Anais Zanotti was born on January 8, 1986, in Saint-Tropez, France. Anais is of Italian ancestry and lives in Miami, Florida. Anais has been featured on over forty magazine covers. She has appeared in many health related magazines, including Men’s Fitness, Muscle and Fitness, Women Fitness, and others. She has also appeared in glamour magazines such as Vogue, Cosmopolitan, Maxim, FHM, GQ, and Playboy. Anais has also been featured in People magazine. Anais was in the 2013 film Exposure, a film about the dangers of modeling in South Beach. Anais Zanotti is very active on social media. Her fan base includes over five million followers on Facebook. She has an additional twenty-eight thousand Twitter followers and nearly half a million people follow her on Instagram.

Anais posts incredible work out videos on YouTube and offers a workout subscription with example routines. Anais does work as a stuntwoman; she has been skydiving since the age of fifteen and has nearly thirteen hundred jumps to her name. Anais has also been certified as a personal trainer by the National Academy of Sports Medicine and claims that fitness has always been her biggest passion.

FAQ: What is Anais Zanotti networth in 2020?