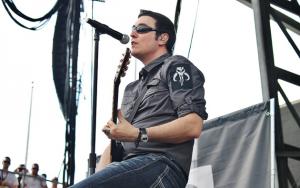 Burnley is known to suffer from a lot of phobias. This inspired him to name their album in 2006 as ‘Phobia’. He has a fear of flying, suffers from hypochondria, and has a fear of darkness. He also admits to avoiding car rides as much as possible because he wants to prolong his life as much as he can.

Breaking Benjamin was forced to take a five year hiatus due to Benjamin Burnley suffering from health issues and a dispute amongst band members over whether they should release a greatest hits compilation album. When Breaking Benjamin returned from hiatus only Burnley remained from the members prior to the break.

He was an alcoholic who is now recovering. In the interview by listenin.org, he admitted that he wished that he could ‘drink himself to death’. Ben says that he’s repentant over drinking as he’s suffering from Wernicke–Korsakoff syndrome which was caused by his excessive drinking in the past. Dear Agony is the first work known to have been written by Burnley without the use of alcohol.

Benjamin Burnley is also known to be lover of tattoos and has at least 9 tattoos on him. A Nirvana smiley face on his left shoulder, his name written in Olde English on his right wrist, a green flower on his right middle finger, a Breaking Benjamin logo on his left wrist, a band around his right forearm are some examples of his known tattoos.

Benjamin Burnley is also well known for his love of video games. He has often lent his talent for writing songs to several different video games. His band, Breaking Benjamin wrote and recorded a song, "Blow Me Away" for the soundtrack to Halo 2.  Additionally, one of their songs “Polyamorous” can be found on several game soundtracks including Run Like Hell, WWE SmackDown! vs. Raw and WWE Day of Reckoning.  The Breaking Benjamin song, “Firefly”, can also be found on the soundtrack for WWE Day of Reckoning. Another well known Breaking Benjamin song, “The Diary of Jane” appears on the soundtrack for NASCAR 07. Burnley has openly spoken out against the Electronic Arts' reboot of Star Wars: Battlefront game after they tried to hire him to promote their game to his fans. He felt that the game was “ruining” Star Wars and was of poor quality.

Burnley is left-handed but plays guitar with his right hand. The net worth of Benjamin Burnley is approximately $8 Million. He has amassed all his wealth through his career in music.

FAQ: How old is Benjamin Burnley ?

FAQ: What is Benjamin Burnley  networth in 2020?