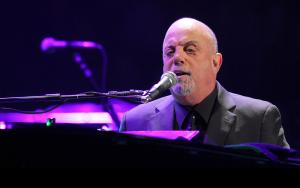 William Martin ""Billy"" Joel (born May 9, 1949) is an American pianist, singer-songwriter, and composer. Since releasing his first hit song, ""Piano Man"", in 1973, Joel has become the sixth best-selling recording artist and the third best-selling solo artist in the United States. His compilation album Greatest Hits Vol. 1 & 2 is the third best-selling album in the United States by discs shipped.Joel had Top 40 hits in the 1970s, 1980s, and 1990s, achieving 33 Top 40 hits in the United States, all of which he wrote himself. He is also a six-time Grammy Award winner who has been nominated for 23 Grammy Awards throughout his career. He has sold more than 150 million records worldwide, making him one of the best-selling artists of all time.Joel was inducted into the Songwriters Hall of Fame (1992), the Rock and Roll Hall of Fame (1999), and the Long Island Music Hall of Fame (2006). In 2001, Joel received the Johnny Mercer Award from the Songwriters Hall of Fame. In 2013, Joel received the Kennedy Center Honors, the nation's highest honor for influencing American culture through the arts. Except for the 2007 songs ""All My Life"" and ""Christmas in Fallujah"", Joel stopped writing and releasing pop/rock material after 1993's River of Dreams. However, he continues to tour, and he plays songs from all eras of his solo career in his concerts.

FAQ: How old is Billy Joel?