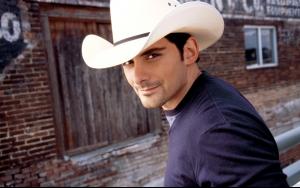 Brad Douglas Paisley is a musician, singer and song writer. He was born on October 28, 1972 in Glen Dale, West Virginia, United States. He studied in John Marshall High School in Glen Dale, West Virginia and graduated in 1991. He also study for 2 years in west liberty state college in West Liberty, West Virginia. Paisley got a scholarship to Belmont University where he study Music Business and receive a Bachelor in Business Administration in 1995 from Mike Curb School of Music Business. After completing his college, he make his internship at ASCAP, Atlantic record and the Fitzgerald-Hartley management firm. While in college he met Kelley Lovelace and Chris DuBois who become his song writing partner.

He was really passion about the music from his childhood. By the age of 8, he got his first guitar from his grandfather. His grandfather taught him how to play a guitar and finally at the age of 10, he performed for the first time in public by singing in the church. At the age of 13, he wrote his first song called Born on Christmas day and later he performed in this song for many times in college and school. After the graduation his first success came in 1996 with David Karsh “another you”. He started his career from his own album Who Needs Pictures in 1999. This album lift brad to a new stage and album was sold to millions of copies with new fame. The next year, the academy of country music named brad as a country new best male vocalist with prestigious horizon awards.

Brad Paisley is a Grammy winning country song writer, singer, musician and also the member of the Grand Ole Opry’s Hall of Fame. From February, 2001 he started to release his albums. He release his second album Part 2, I’m Gonna miss her was really outstanding and hitting no. 1. His next album Mud on the Tress was also totally hitting number 1 and won a several awards. Some of the songs of the Brad Paisley like find yourself, she’s everything ,remind me, I’m still a guy, American Saturday night , letter to me, anything like me, we dance, the world, welcome to the future etc. are really historical and incredible. He has also an associate acts with Chris DuBois, Ashley Gurley, Kelley Lovelace, Frank Rogers, Carrie Underwood, Black Shelton and Little Big Town.

Brad Paisley is a singer-song writer, Guitarist, Musician, Artist, Actor, Film Score Composer, Voice Actor, Music artist. He has won many awards, like he was the 2008 CMA and ACM male vocalist of the year. Paisley was named as the entertainer of the year in 2010 CMA awards. He has record ten consecutive single that have reached the top ten on the chart.

Brad is contemporary country stars. His zodiac sigh is Scorpio and height is 5 feet 8 inch. He is married to the actress Kimberly Williams. The couple has two sons and are not divorced till now. Brad paisley is a successful stars and he has a good income as well.  His net worth is $65 million dollars. The commercially successful year for brad was 2012, Forbes has estimate that he has earned $40 million dollars before tax.

Paisley is a very hardworking stars. He has got name and fame in short period of time and has a huge fan following. He is in social sites. He can be followed in Twitter, Facebook account and Instagram.

FAQ: How old is Brad Paisley?