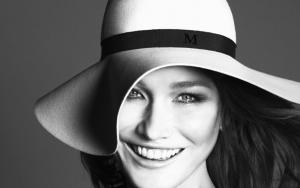 Carla Gilberta Bruni Tedeschi is a musician turned model born in Turin, Piedmont, Italy. Her parents are Italian composer Alberto Bruni Tedeschi and Italian pianist, Marisa Borini. Lately, she announced that her real father is Mauricio Remmert, an Italian-born Brazilian businessman. Carla Bruni started her early career when she gave her college up for modeling, and by 1990’s, she retired to focus more on her music career. She was one of the pioneers in modeling, and her beauty astounded many powerful men. Her net worth is around $15 million.

During the stretch of her career, Bruni was reported to have dated many popular personalities. Most of her relationships were short-lived and scandalous. Bruni dated the rockstar Eric Clapton, who called her the love of his life, but their relationship ended shortly after when she was introduced to the Rolling stones vocalist, Mick Jagger. This soured the friendship of the two rock stars, who were friends during that time. But Mick and Carla’s relationship was unstable because he was married to actress Jerry Hall and it ended after a few years. Jagger’s ex-wife, Jerry Hall claimed that Bruni was the reason for their divorce, after 9 years of marriage.

Carla has also been involved with the business mogul Donald Trump. However, Trump allegedly broke up with her because he said Carla was trying to convince him to break up with his then fiancée, Marla Maples, in favor of her. She also dated Kevin Costner, but their relationship was unsuccessful because she was rivaled by her co-super model, Elle Macpherson. Elle desperately tried to separate the couple in which she succeeded and finally, became Costner’s girlfriend.

One of the most popular scandals in Bruni’s relationships was when she fell in love with the son of her former live-in partner Jean-Paul Enthoven, a French publisher. Raphael Enthoven, 10 years younger than her, became her boyfriend, resulting to the end of her relationship with Jean-Paul. Raphael was married to Justine Levy for 10 years, while he was dating with Bruni, and he divorced Levy, in favor of the latter. Rapahel and Carla’s relationship only lasted almost 6 years because neither of them was serious with the relationship. They had a son named Aurelien who was born in 2001. Justine Levy’s successful novel, Rien de Grave (Nothing Serious), was said to be based on her love story with Raphael, and the antagonist of the same novel was based on Bruni herself.

FAQ: How old is Carla Bruni?