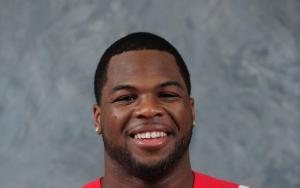 Carlos King Hyde, born and brought up in Cincinnati, Ohio is trying it to the fullest to maintain and build his reputation in the high profile game of American football. Born on September 20, 1992, the Virgo from the San Francisco 49ers was a good player from his high school days. Carlos completed his high school from the Princeton High School and was a freshman that year. He then migrated to Naples, Florida and completed his final three years from the Naples High School. Apart from football, Carlos showed keen interest in playing Basketball. After the senior season in Naples, both the Naples Daily News and the Ft. Myers News-Press recognized Hyde as the Player of the year. In the year 2007 he made it to the Naples state championship team.  After high school he received scholarship offers from Florida, Miami (Fl.) and Florida State. Carlos had keen interest in joining the Ohio State, but could only make it after spending his fall Semester of 2009 in University of Florida, Gainesville.

Hyde entered the Ohio State in the year 2010 and soon became a player of the University’s Team. His initial position in the team was of a backup running back and in his first junior season he was able to appear for 10 games and missed 2 games on account of ankle injury. Carlos had highly anticipated his senior season, but because of connection with a derogatory incident at a local bar, he was suspended for the first three games of the season. However, he was acquitted of all criminal charges against him, hence was able to return to the game and finish of the last eight games of the season in a strong position. During his time at the Ohio State, he was able to bag a position in the First team of All-Big Ten Selection and the Associated Press’s third team of All-American selection.

The second round of 2014 NFL draft, sent him in to the kitty of San Francisco 49ers and he has been with them since then. Carlos is a player with a strong built and comes on to the field with blasting energy and power. His game is extra power packed when dealing with short goal-line runner and he gets the edge better as the game progresses. The 2014 season for Carlos Hyde started with overflowing expectations. Luck played a favorable game for Carlos and he was able to the capture the position of second running back. This so happened, as the other experienced running back Aces had gone down due to some injuries. The season of 2015 recognized Hyde as the starter of the year but later on December 12, he was placed in reserve for the injured.

Hyde is still in the learning phase and there are many areas of his game which need improvement. The most important aspect is to focus on correct nutrition and remain fit to avoid any weight fluctuations. As Carlos continues to strive for a better position in the team, audiences wait for a head turning game from him. For all updates and comments he can always be reached through his twitter account.

FAQ: How old is Carlos Hyde?