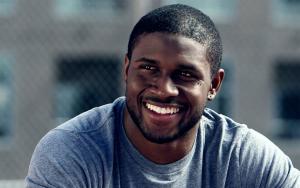 Reggie Bush is a professional American Football player. He plays as a running back for the San Francisco 49ers in the NFL (National Football League) currently. Born in California in 1985, he studied in Helix High School, where he played as a running back. His phenomenal performances made him one of the best running backs in the nation at that moment, and also helped him win several awards including the Silver Pigskin trophy. In 2003, he was considered as the top running back in the country, according to Rivals.com.

After high school, Bush attended the University of Southern California. He used to play for the Trojans during this time period. He was superb in carrying, catching, and returning the ball, exactly what his coach wanted. He won the Heisman Trophy in 2005. Overall, he had a brilliant record while playing for his University. In 2006, he decided to go for the NFL draft, instead of continuing to play for his University team in his senior year.

Initially, due to his impressive performance in the draft, Houston Texans were rumored to choose Bush. However, they chose Mario Williams instead. So, the New Orleans Saints decided to sign a contract with him. Analysts throughout the nation heavily criticized this decision of the Texans of not choosing Bush, and some even commented that this was one of the greatest mistakes ever made by a team during the NFL draft.

Bush announced that he will be wearing jersey number 5, since he had been wearing that same number throughout his school and college. This, however, violated the existing rules of the NFL, since a running back could only wear a number from 20 to 49. His request wasn’t approved, and finally Bush settled for jersey number 25. In his first season, his performances were not up to mark initially, but later he started becoming more productive. He continued playing for the same team till 2010, though his serious injuries had a negative impact on his stats.

Reggie Bush joined the Miami Dolphins in 2011. He stayed there for 2 years, and his performances improved significantly during this time period. He joined the Detroit Lions in 2013. The contract was worth $16 million spread over a course of 4 years. Bush was extremely happy about this contract and stated that playing for the Lions was a dream come true. However, the Lions released Bush in 2015.

Soon, the San Francisco 49ers picked him up in March, 2015. The contract was worth $2.5 million for 1 year. Bush has only played two games for the team till now, but failed to play the whole time due to his injuries.

Reggie Bush started dating Lilit Avagyan in mid-2011. Lilit is a dancer and choreographer in Los Angeles. Bush and his girlfriend got engaged in 2013. Soon after the engagement, Lilit gave birth to their first child, a daughter named Briseis. She is two years old now. Next year, the couple married. This wedding took place in Grand Del Mar resort located in San Diego.

FAQ: How old is Reggie Bush?