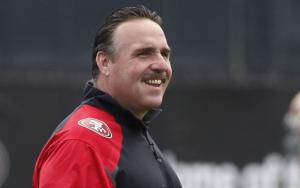 James Andrew Tomsula the NFL (National Football League) coach for the San Francisco 49ers was born on April 14, 1968, in Homestead, Pennsylvania.  He is serving as a coach for 49ers team since the beginning of the 2015 League season. In 2007 February, he was as a defensive line coach for the team 49ears till his promotion. James also served as a head coach for the RF (Rhein Fire) of NFL. He accumulated a record of 6-4 of NFL Europe in the year 2006.

Tomsula was raised in the Pittsburgh village, which is located at the outskirts of Homestead, Pennsylvania. He played football during the period 1987-90 at Catawba College after he transferred from MTSU (Middle Tennessee State University) past 1986 season. He served as an assistant coach under DC (Defensive Coordinator) Fred Hamilton at Charleston Southern. Hamilton helped him gain his defensive coaching skills during the period 1992 to 1995. After that, in 1989, he began his career as a coach at Catawba.

On January 14, 2015, Jim Tomsula was listed as the 19th head coach of the SF 49ers after serving as team’s defensive line coach for eight seasons. In the final game of the season 2010, he served as an interim head coach and won the game over Arizona Cardinals with a 38-7 score.

James Tomsula enjoyed his most successful game in the history of NFL Europe before joining the SF 49ers. In 2006 he was listed as a head coach for Rhein Fire, at the age of 38, he served as a coach of NFLE, the youngest coach in NFLE history. Also, he served as a defensive coordinator of Berlin Thunder for two consecutive seasons. In the first season, the team won World Bowl XII with a defense, which got first in the NFLE ranking.

In 1988, Tomsula joined the League Europe as a defensive-line-coach of the EM (England Monarchs). He also served five seasons as a defensive line coach for Scottish Claymores. There, he became popular by producing NFL’s most prominent lines. He also donned a leading role by coaching young talented players in the NFL’s NPD (National Player Development) program.

Though, Tomsula’s career as a coach began with uncertainty, but his commitment to coach the team for the game was determined. He started his career as an assistant coach at alma mater, but, unfortunately, his knee injury almost made him end his career. But, again in the following season, he took a defensive line coach post at WHHS (Woodland Hills High School). With the support of his family, he continued to pursue his dream as a football coach and obtained a remarkable ranking as a VA defensive line coach at Catawba in 1997.

Tomsula’s ancestors are immigrants from Hungary and his grandfather’s father served in the U.S. Navy during WWII.  Thomsula married his wife Julie and lives in San Jose with their son James Bear and two daughters Brooke and Britney.

In Matt Maiocco’s new report, it was stated that Jim Tomsula gets the salary of $3.5 million per year. He is the SF 49ers head coach, but it looks like he gets less salary for his ranking.

FAQ: How old is Jim Tomsula?