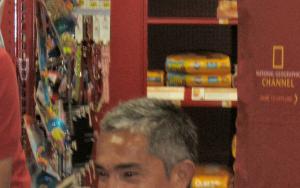 Who is Cesar Millan?

Cesar Millan is known as a Mexican-American professional dog trainer and author. He is most famous for his TV series, Dog Whisperer with Cesar Millan.

In 2002, Cesar Millan developed the pilot for Dog Whisperer, a reality TV show that follows Millan as he works in the field of canine recovery. The series debuted on the National Geographic Channel on September 13, 2004, and afterward moved to the Nat Geo WILD channel.

Cesar Millan has an estimated net worth of over $35 million dollars.

Cesar Milin was married to Ilusion Millan for about 16 years until she initiated a divorce in 2010. Many sources say that his wife was paid a hefty sum of 400 thousand dollars and a monthly amount of 33 thousand dollars to keep the stories about their private life away from the media. The divorce settlement also revealed that she is not supposed to expose any information about their marriage life, sexual relationship, or any other personal details like photos, videos, or other materials. In an old interview with the media, his wife stated that he had a hard time loving her because he was so attached to his pets and he was not a people person.

After the birth of their first son, Ilusion had a gall bladder surgery after which Cesar never visited her in the hospital. On the day she came back home, Cesar was more involved with his dogs than with her. In the same interview, Cesar said that the man’s work is to earn money to feed for the family. Ilusion said that if Cesar did not get what he wanted, he was verbally very abusive.

Cesar referred to Ilusion as a strong and stubborn woman. Ilusion said that he focused on her wrongs, in a hope that she would become submissive. However, their differences proved irreconcilable and she left him. Cesar called her back, to ask her if they could get back together. She agreed to get back together under one condition which was marriage counseling. During therapy, Ilusion said that she did not want him to treat her like property and claimed that he never said that he loved her. He claimed that she would expect him to be patient and cuddling when she is upset but she does not do that when he is upset.

Cesar said that Ilusion is an expert on emotions and encouraged him to move on in his career. On the other hand, Ilusion said that her husband broadened her world. Cesar's favorite dog, Daddy, died in 2010, shortly after his wife left him. The divorce news came to him as a shock, when he was in England. Unable to cope up with the two big losses, Cesar attempted suicide with overdosage of drugs from which he was rescued and hospitalized.

In 2010, Cesar started dating his new girlfriend, Jahir Dar and they have been together for a decade.

FAQ: How old is Cesar Millan?