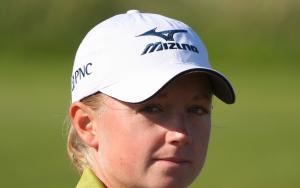 Who is Stacy Lewis?

Stacy Lewis is known as an American professional golfer. She is most famous for winning the 2011 Kraft Nabisco Championship and the 2013 Women's British Open.

Stacy Lewis was born on February 16, 1985, in Toledo, OH. She started playing the sport of golf when she was just 8 years old. Three years later, she was diagnosed with scoliosis but it got it treated successfully. She did her primary schooling at Woodlands High School. When she was a student in high school and recovering from surgery, she missed her first potential golf season. In one of her interviews, she had explained how her life was as a kid facing spine illness. She had to put on a back brace, which helped her spine for almost seven years. Despite this illness, she didn’t give up on golf. She started her golfing with her dad and learned the small details of the sport.

She graduated with a degree in Finance and Accounting from the University of Arkansas in 2008. Lewis was a very talented college player and won All-American honors at her university. In 2005, as a freshman, she won the Southeastern Conference Tournament. She was awarded the SEC Freshman Golfer of the Year in 2006. She also won the Women's Western Amateur Award. She was out of the tournament in 2007 due to a back injury. She won the NCAA Division I Championship sponsored by Golf Digest. She became the recipient of the Dinah Shore Trophy. She led the U.S. team at the COPA DE LAS AMERICA, finishing second in individual play and leading the team to a victory.

She qualified for the United States Women’s Open, in 2007 where she finished tied for 93. Bouncing back after two months, Lewis ended first in the LPGA Arkansas Championship in 2007. In her senior year, Lewis once again won the SEC Tournament and was chosen SEC Golfer of the Year. She was also elected SEC Scholar-Athlete of Golf in the same year. In 2008, when she was a member of the U.S. Curtis Cup team. Lewis was the first player to win 5–0 in a single Curtis Cup.

In 2008, Stacy Lewis participated in seven events on the LPGA tour and earned over $248,000. After qualifying for the standard process, she was elected to play in the U.S. Women's Open. In 2011, it was in Kraft Nabisco Championship that her first major victory was recorded. She was named the 2012 LPGA Player of the Year. In 2013, she won the Women British Open. That same year, she was the first American to win the Vare Trophy in 19 years.

Sterling Sports Management represented Lewis in June 2015. She earned the 41st position in Golf Digest that same year., in 2013! This victory came after she won the Player of the Year for LPGA, in 2012.

Stacy Lewis has an estimated net worth of over $10 million dollars.

Stacy Lewis got married to Gerrod Chadwell in 2016. Her husband works as a golf coach. Their wedding ceremony was not done on a grand scale, it was a small ceremony attended by only a few family members and friends. Gerrod Chadwell had proposed her at the end of 2015 when both of them were at Arkansas University for a football game.

FAQ: How old is Stacy Lewis?