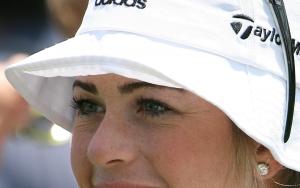 Paula Creamer is a professional golfer from the United States who competes on the LPGA Tour. She has won 12 tournaments in her professional career, including 10 LPGA Tour events, and has reached the top of the Women's World Golf Rankings as high as second. She won the U.S. Women's Open in 2010. Creamer was 10th on the all-time LPGA career money list as of the end of the 2019 season, with $12,131,822.

Paula was born in Mountain View, California, and raised in Pleasanton, the only child of an airline pilot and a homemaker mother. As a child, she was an active participant in acrobatic dancing and gymnastics and dreamed of being a cheerleader. By the time Creamer was ten years old, she was playing golf. Creamer's father, airline pilot Paul Creamer, played the game daily. The family home was next to Castlewood Country Club, where Creamer learned to play. It was immediately apparent that the young girl had talent. She soon left the dance team behind and began competing in tournaments. When Creamer was eleven years old, she was victorious in 18 successive junior matches.

To further Creamer's career, the family moved to Florida in 2000. The young golfer honed her golf game at the David Leadbetter Golf Academy. She also became a student at the Pendleton School, a private high school that primarily educated elite athletes. While focusing on her education, Creamer continued to compete in amateur and junior tournaments as a young teenager. She also played in select elite golf events worldwide, such as in 2002, when she was the female U.S. representative at the R…A Junior Open in Royal Musselburgh, England. Creamer finished sixth in the combined finals totals. By age 12, she had won 13 junior events in a row. By 13, Creamer had already become the top-ranked female junior golfer in the state, winning 19 national tournaments, including 11 American Junior Golf Association events. She was also s named Player of the Year by AJGA in 2003. Creamer has even represented the U.S in the Curtis Cup. Just four days before graduating from high school, she made a 17-foot birdie putt on the 18th hole to win the Sybase Classic presented by Lincoln-Mercury and become the youngest winner of a multi-round event in LPGA history the age of 18 years, nine months, and 17 days.

Creamer's first significant notice among the more fantastic golf world - outside of junior golf - started coming in 2004 when she was 17. That year she tied for 13th at the U.S. Women's Open. And, playing on a sponsor exemption, Creamer placed second at the LPGA Tour's ShopRite Classic, just one stroke behind winner Cristie Kerr.

Ready to move up to the professional ranks, Creamer entered the LPGA's Q-School at the end of 2004 and won it by five shots. She turned pro and joined the tour but not before both Golfweek and Golf Digest had selected her as the top amateur of 2004.

FAQ: How old is Paula Creamer?

FAQ: What is Paula Creamer networth in 2020?

Quick Facts
Help us Edit this article and get a chance to win a $50 Amazon Gift card.
Last Modified: Jul 25 2021
You may also like
articles you may like