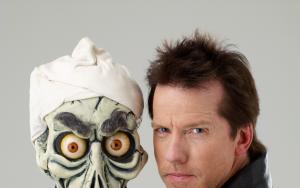 Jeff Dunham is known as an American stand-up comedian and ventriloquist. He is most famous for his characters, José Jalapeño and Achmed the Dead Terrorist.

Jeff Dunham was born on April 18, 1962 in Dallas, TX. Dunham was adopted when he three months of age by a Dallas couple who raised him in an affluent neighborhood as an only child. Dunham’s career as a ventriloquist began early and developed quickly. By his junior year of college at Baylor, he was flying around the country on weekends, doing private shows. Jeff Dunham graduated from Baylor University in 1986.

Jeff Dunham met his first wife, Paige Brown in West Palm Beach, Florida. Brown and Dunham began dating towards the end of 1992. The couple got married in May of 1994. Paige Brown already had a child at the time of their marriage. Dunham happily adopted her daughter, Bree into the family. The couple went on to have two daughters of their own. Ashlyn was born in 1995 and Kenna was born in 1997. Dunham spent considerable time on the road during their relationship. He was traveling to perform more often than before their marriage. This proved too big a strain on their relationship in the end. The couple eventually got a divorce when Dunham filed for one in 2008.

After Jeff Dunham and Paige Brown got divorced, Dunham dating Audrey Murdick. By the middle of 2009, the two were in a relationship. Murdick is a nutritionist and a personal trainer. In addition to being certified in nutrition and personal training, Murdick enjoys bodybuilding. Murdick is also a professional model.

Jeff Dunham was rumored to own a replica of the Batmobile used in the Tim Burton film, Batman. This rumor was born from a segment in a documentary about the fictitious car. In an expression of his obsession with Batman, Jeff Dunah married his new wife in a Batman-themed wedding. The wedding nuptials took place on October 12, 2012 at the Sunstone Vineyards and Winery. The cake was made in the form of the Batmobile with a Batcave and edible models of the bride and groom dressed as Batman and Catwoman respectively.

Jeff Dunham was working in comedy clubs around Texas until the end of the 1980’s when he made a move to New York.

In 2003, Dunham appeared for the first time on Comedy Central as a solo act. He had been on the network before, but this time he was given his own spotlight. At the peak of his popularity, Dunham was performing in arenas for thousands of people. Dunham has appeared on The Late Show with David Letterman and Comedy Central Presents. He also starred in a number of comedy specials.

Dunham welcomed fans into his old neighborhood as his family, companions and different insiders set down to talk about his life in the TV special, Biography: Jeff Dunham – Talking Heads.

Dunham gives a dollar from every one of his shows to local charities as he tours the nation. Dunham lends a hand to those out of luck, both in emergencies and over the long term. The Jeff Dunham Fund has contributed over 1.3 million dollars to charity.

FAQ: How old is Jeff Dunham?